You can see a screen recording here - what do you think of embedding Wiktionary in the popup when you click or tap a word after answering?

I really like it, though it’s a lot of bright white when you have dark mode turned on. A couple options:

What do you think? Is there another option we missed?

Seems nice (especially the referred way of using the Clozemaster way to display their API), but I don’t tend to use the app, so I don’t feel very eligible to vote on this.

I can’t say that I’d find it useful. As I’ve mentioned elsewhere I regard Wiktionary as being full of quite accurate, functionally useless information. The definition of “dobbiamo” in the video clip (“first-person plural present indicative/subjunctive of dovere”) is a classic case in point. If the student doesn’t know what “dovere” means, then it gets them nothing without clicking through to the site and following the links anyway.

The page for andare is… better, and it’s good that the pop-up links to the Italian segment of the page bypassing the Asturian part… but for whatever reason Wiktionary has chosen to put the etymology at the top of the section and you have to scrooooollll down to start seeing definitions. I’m not saying that the etymology is completely irrelevant (it can allow you to make connections with related words) but there’s a good reason why most dictionary sites put it UNDER the definition.

If I were studying a language as an ACADEMIC exercise then Wiktionary may well be a “go to” tool. But I’m not; I’m learning languages as a PRACTICAL exercise which means that I tend to avoid Wiktionary and go to sites that get to the point faster without reference to terms like “with following syntactic gemination”.

I can’t say that I NEVER use Wiktionary, but my vote was for the “This doesn’t interest me” option. 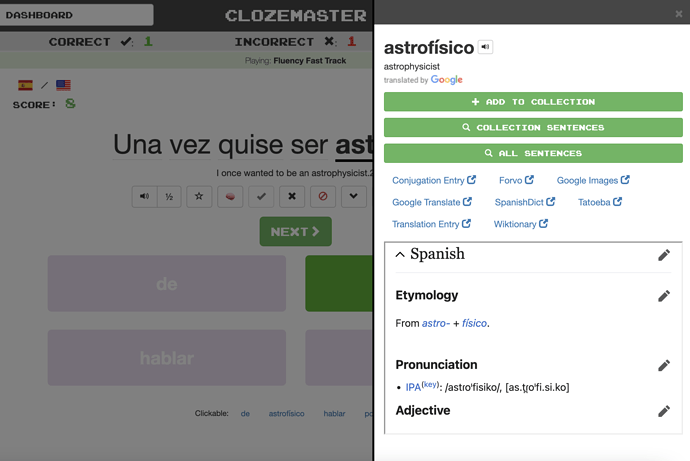 And on the web.

At the very least, this would have to be togglable – and I would turn it off. There are several reasons why I click on a word:

I do each of these three fairly often. So I would not want to automatically privilege Wiktionary over everything else. This is especially true for Hebrew, a language for which Wiktionary is not particularly useful, as I described on LuciusVorenusX’s thread.

I second @LuciusVorenusX ‘s opinion. Embedding third-party services into Clozemaster may somehow improve user satisfaction. But this is not a high priority for some learners — especially so-called “agglutinative languages” such as Turkish, Hungarian, Finnish, Japanese, Korean, and Indonesian. I don’t speak fusional languages such as Russian, Italian and Spanish, but I believe fusional languages have the same problem when it comes to how to manage the complexity of lemma and conjugations.

Wiktionary doesn’t properly redirect conjugated words to their root words, and thereby you see so many “page not found” errors…

To tackle this issue, Clozemaster should have conversion tables in each language as LuciusVorenusX explained. I give you additional examples in my target language, Indonesian.

The root-cause is the quality of “word frequency lists” Clozemaster refers to. Some lists don’t handle the conjugations properly. “Jalan” is introduced in Most 500 collection. “Jalannya” is in Most 3,000, and “jalanmu” and “jalanku” are in Most 10,000 collection. How many times do I have to learn such a simple word in the different stages of fluency. That’s why I believe “conversion tables” by word family are critical not only for Wiktionary but also the fundamental quality of sentence collections.

I hate it. I don’t use Wiktionary and sometimes I want to copy a whole or half a sentence to analyse it more deeply in either Google or Translate.com.

Is there any way you could introduce an off switch, please??

That’s helpful to know - thanks! It is indeed toggle-able: 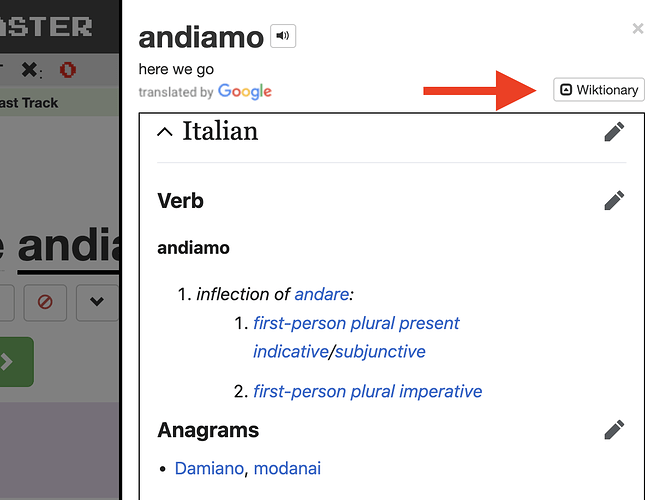 Makes it smaller - but still annoying

I didn’t realize it could be shrunk, though there doesn’t seem to be an option to turn the feature off altogether. I need to work with it for a while to decide how I feel about it.

@galning @alanf I’m not sure I understand - it should be an on/off toggle. What browser are you using? Might you be able to post a screenshot?

I understand @galning and @alanf ‘s sentiments. The old pop-up version works for me better than the new one. I’m on Win10 x Chrome.

The new pop-up even reminds me of the terrible Microsoft Excel “F1”. When I try to push “Escape” key, I sometimes push “F1” key accidentally. And then, the long unreadable Excel Help window pops up and consumes a quarter of my screen on the right side. I’m probably suffering from PTSD due to Microsoft. I really want to disable F1 on my Excel.

I would like to give @mike two possible best practices for a benchmark purpose: 1) Wikipedia’s mouse-over preview function, and 2) iOS look-up function.

You can see the screenshot and professional review on the Wikipedia’s functionality here. This preview function enables users to quickly skim the overview of linked articles without clicking the link during a target article. — For example, you are reading the “Orange” article and it says “contains a lot of {{Vitamin C}}”. A summary of “Vitamin C” article is popped up when you mouse over the term {{Vitamin C}}. This function saves one’s time. Unlike Clozemaster, the Wikipedia’s pop-up doesn’t occupy a quarter of my laptop screen. It can be set on/off from a user account console.

My iPhone x Safari gives preview of 4-5 different dictionaries at once when I (as a Japanese native speaker) am reading an English online article and push an unfamiliar word for a second. Two are usually from English-English dictionaries, and the rest is from English-Japanese. On the other hand, the new Clozemaster pop-up doesn’t function as an overview of all possible references, and an unreadable etymology part of Wiktionary is always given the highest priority. The approach doesn’t respect differences of user’s choices.

My point is each language has totally different popular/major dictionaries. Wiktionary cannot assume the role of “one-size-fits-all” solution across all language courses. But the Clozemaster’s new feature occupies a quarter of my screen horizontally even if the toggle is on and it makes vertically smaller. And the new pop-up is located far from a target word. A pop-up, in general, is supposed to be a small preview near a target word. It doesn’t fit the current user interface trend. I think the new feature is optimized too much for Wiktionary and sacrifices general usabilities.

I’m not sure I understand - it should be an on/off toggle. What browser are you using? Might you be able to post a screenshot?

This is what you get when you select a word; I agree with @MsFixer, it’s annoyingly large and on smaller screens it obliterates a large chunk of the sentence (including the word in question here). 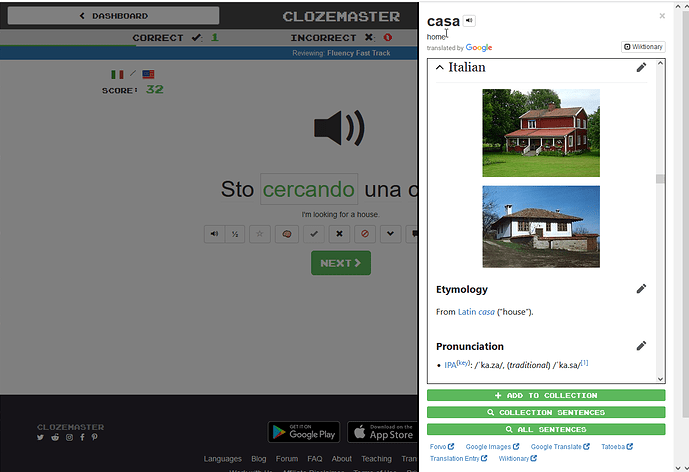 Then if you click on the Wiktionary button, yes, it will shrink down the Wiktionary entry as well as the Google Image search if applicable, but you still end up with as much as a third of your screen and a substantial chunk of the sentence obliterated which is a pretty high visual price to pay for 6 links. 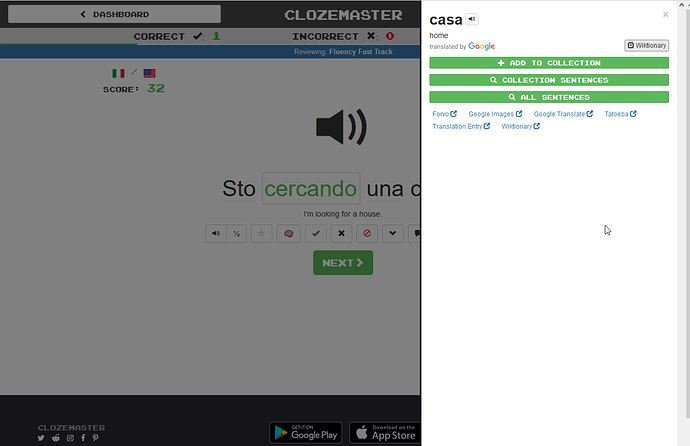 My point is each language has totally different popular/major dictionaries. Wiktionary cannot assume the role of “one-size-fits-all” solution across all language courses. But the Clozemaster’s new feature occupies a quarter of my screen horizontally even if the toggle is on and it makes vertically smaller. And the new pop-up is located far from a target word. A pop-up, in general, is supposed to be a small preview near a target word. It doesn’t fit the current user interface trend. I think the new feature is optimized too much for Wiktionary and sacrifices general usabilities.

I just wanted to quote that because there is not a single clause in there that I could conceivably agree more with.

Incidentally, for me at least there is another bug. You can click on most of the words to bring up the pop up as many times as you want, but (double) clicking on the Cloze word to select it and bring up the popup now seems to be a one shot deal. Once you close the popup, you cannot get back to it no matter how many times you click on the cloze.

If there’s a vote mine is for the restoration of the old pop-up. It’s not perfect but… it’s better than this one for all of the reasons that MsFixer gave.

it’s just really annoying that I’m trying to copy/paste and it’s constantly popping out, even when i have no interest in using it.

It’s not shrunk, as such, though. It just hides some of the text and leaves you a white panel. So a third of the screen is still eaten up.

I’m probably just “awkward” but i have a PC with 2 large screens and like to have multiple things open at once. I use Edge for Clozemaster / Duolingo (shhhhhhh) but then Chrome opens a bunch of favourite dictionary / grammar sites (which don’t include Wiktionary). Plus Excel, to make notes into.

I like using 2 diff browsers just because the visual (of the coloured logos) on my System Tray makes it easier to flip around quickly.

So I don’t want a dictionary launching in Edge, which is the one my lessons are in.

We all have different ways of working and other people, using other devices, may like this pop out.

It’s too early for me to judge the pros and cons… but in general, I often need to know word origins (etymology) in order to really commit words to memory. Often i need to go searching on the web to find it. So a handy link to Wiktionary should, in theory, be useful…

ncidentally, for me at least there is another bug. You can click on most of the words to bring up the pop up as many times as you want, but (double) clicking on the Cloze word to select it and bring up the popup now seems to be a one shot deal.

This appears to be a Firefox thing. On a different computer I’m still getting that issue, but on Chrome 100.0.4896.127 64 bit you can call it up for the cloze word multiple times as well.

Let me additionally give you an example how the “page not found” issue happens. Here is a screenshot from the Japanese from English course. As I explained earlier, Clozemaster fails in lemmatization in an agglutinative language. Chinese and Korean also don’t split each word by space, so they probably have the same issue. 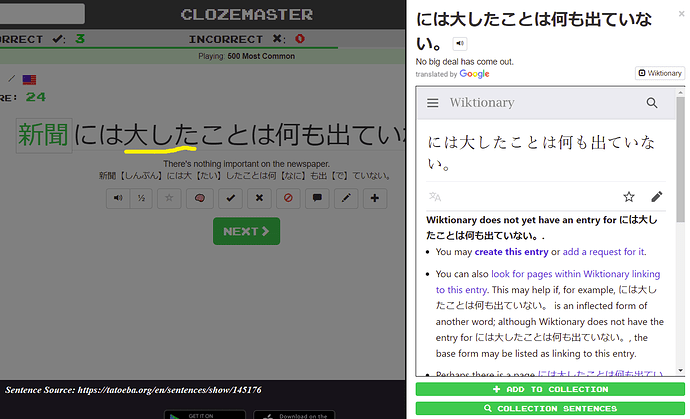 No big deal is published in the newspaper. (Note: robotic word-for-word translation just for discussion)

I clicked 大して (adjective/adverb meaning “big”). But Clozemaster just splits the sentence into two: the cloze-word 新聞 (newspaper) and the rest of the phrases. This means Clozemaster recognizes “nobigdealisrevealedinthe.” as one word.
The correct split should have thirteen parts, not two:

On top of that, the pop-up doesn’t work properly even for cloze-words due to the conjugations. Former several course takers complained about it two years ago here.
The minimum unit of verb in the abovementioned example is 出 followed by a particle て, but the root word (lemma) is 出る. So, all conjugated forms such as 出て (go and then), 出た (went), 出ない (don’t go), 出たら (if go) etc. should be all categorized into the same word family. Without this data processing, the pop-up doesn’t work for agglutinative languages. And I understand it’s very challenging.

The old pop-up simply returns results from Google Translate even if Clozemaster’s lemmatization is awkward. That’s enough for agglutinative languages.