As in Dizionario italiano-inglese WordReference

As most users would know, when you don’t recall the meaning of a word you have the option of selecting it to see a pop-up which contains a definition from Google. 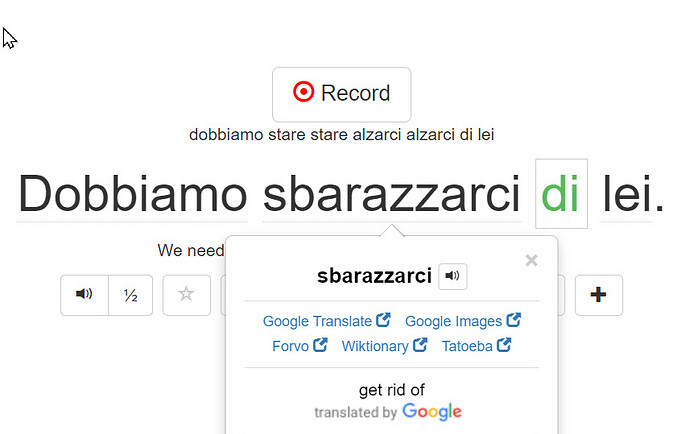 You can select Google Translate as a “go to” option, which will (or should!) get you the same result as the Google translation in the popup. You can go to Google Images (for what that’s worth since Google’s image search is notoriously bad, but with nouns you may get lucky), Forvo for pronunciation, or Tatoeba for the sentence’s origin. The only one that is really a “dictionary” (if one uses the term charitably) is Wiktionary… and I reeeeeaaally hate going to Wiktionary.

Now, I’m sure that the information is completely accurate. It’s also completely and utterly useless when what you want is the word’s meaning.

When you click through to the link to the main verb you get this:

So rich, so detailed, you finally get A meaning. One. No examples, no synonyms. Basically you get Google Translate again, just with more clicks.

Now compare that to Word Reference: 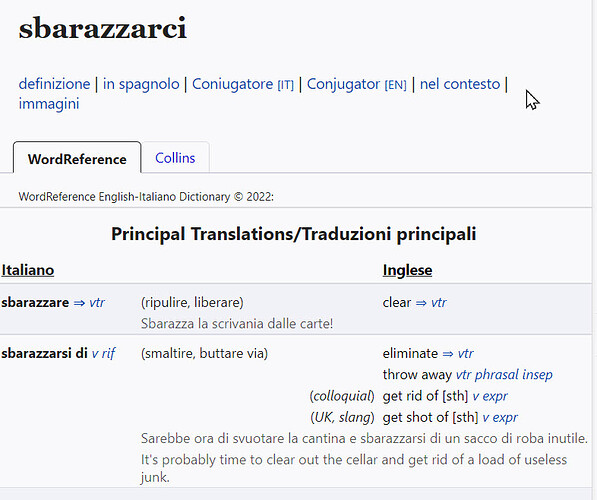 I know that there isn’t an infinite amount of space on that dialog, so I’m not necessarily asking for Word Reference to be added to it. Nor would I suggest that Wiktionary be removed because I’m conscious that while I think it’s a waste of space, others may not.

What I would like to see, though I realise that I’d be pushing my luck with this suggestion since it would involve a bit of coding effort, would be for us to be able to select up to 5 different lookup sources of our choice. I would dump Wiktionary as soon as look at it if I was given the choice to make room for Word Reference.

I’d probably swap out one of the others for https://www.treccani.it/ if I had a choice, though I’m aware that that one is very language specific. Rather than relying on Clozemaster coders to generate a link to every possible reference combination, a way around this would be to require us to specify the links for any reference source since the sources are pretty much always in the form URL/WordBeingLookedUp.

I’ve gotten used to Wiktionary, and would miss the link if it were removed, but I really like the idea of making the dialog customizable.

Great idea! I always go to word reference when I don’t know the meaning of the cloze or other word/expression from the sentence. Having the link would be super convenient.

I’d probably swap out one of the others for https://www.treccani.it/ if I had a choice, though I’m aware that that one is very language specific. Rather than relying on Clozemaster coders to generate a link to every possible reference combination, a way around this would be to require us to specify the links for any reference source since the sources are pretty much always in the form URL/WordBeingLookedUp.

For German one of the options is https://www.dict.cc/ so having language specific options is something that already exists (N.B. this is in addition to the 5 standard links that you mentioned). Therefore, I don’t see why adding Treccani for Italian is an unreasonable request, as it a source that is frequently used as a reference by those of us who are learning Italian (as can be seen by the number of times it is referenced in posts on the forum).

Now that I’ve started playing Hebrew from English in addition to Russian from English, I can see how the same reference site can vary in terms of usefulness for different languages. For Russian, Wiktionary gives me almost everything I need. But for Hebrew, Wiktionary is less useful (since its declensions are less complete), and I often need to go to Morfix or Reverso Conjugator. While I could lobby for changing those links for everyone, I would be happy if we could customize our own links, as suggested by @LuciusVorenusX. Hopefully, we’d be able to specify different customizations for each language pair we use.