Help us improve Clozemaster! What would you most like to see added, changed, or improved?

I’d be interested in some clean up/corrections of sentences:

This is REALLY trivial…could we have a Brit flag?? You’re identifying me as “American” and, while I love our cousins VERY much, I ( personally) like to see which country people are from. And I’m currently an American Imposter!

PS - been reporting a lot of Cloze issues lately and been impressed with how quickly you respond. Well done.

Ahimè, sounds a bit like the complaints on Duolingo. Have to say, the flag doesn’t worry me at all. With all that Cloze offers, I’m just glad to be a member here and am quite happy to sport an American/English flag next to my courses. There’s always the option to pop our country into our profile to avoid any confusion. Sorry if I sound unpatriotic, I just haven’t thought much about it, too busy rounding up my Renewals

Personally I’d like also fixes in the Romanian course - there’s some number of sentences where answering the correct answer is counted as wrong. There is of course a workaround - adding the correct answer in alternate answers. Fixing would be better of course. I also notice this is also happening quite a bit when adding your own collections

For Romanian - remove all the sentences with people’s names and city names that don’t translate. I have had to enter Boston, Mary, Tom etc. multiple time

For what it’s worth, in Romanian, sentences containing “Boston”, “Mary”, or “Tom” constitute about 20% of the total number of sentences in the Tatoeba corpus from which they are collected, so getting rid of them would have a significant impact on the size of the collections, and changing the names would take nontrivial effort. That doesn’t mean it wouldn’t be worthwhile, of course. I find the overuse of these names a problem in Russian, another language in which proper nouns are declined.

@volkert
As for the first three points, Clozemaster is not the primary contact because Clozemaster’s content depends heavily on external sources.

Re: #1 (multiple correct spellings), you can add “alternative answers” as many as you want simply by editing the sentences.

Re: #2 (unique nouns such as “Boston” and “Tom”), the problem is the frequency lists. The FAQ page articulates that CM refers to the frequency lists suggested by Wiktionary. Your Norwegian course refers to three different lists, one of which is based on OpenSubtitles.org. My Indonesian course also refers to the OpenSubtitles list, and the quality is low – it contains so many words from English movies and TV programs. If you want Clozemaster to remove English words (i.e. not written in your target languages) or unique nouns from your course(s), firstly you need to mark such improper words on the frequency lists, and sent them back to Clozemaster.

If you don’t have such time for comprehensive screening, just push the “ignore all” button.

Re: #3 (correction reports), you need to directly report to the sentence source, i.e., Tatoeba.org. Once Tatoeba corrects them, Clozemaster can download the latest version from Tatoeba and can update the courses. I used to report errors to Tatoeba, but I found the people on Tatoeba (especially admins and corpus maintainers) lack of knowledge and just wasting my time. So, I decided not to touch the source and gave up. Rather, I modify improper sentences on Clozemaster by myself and/or push the “ignore” button so that the improper sentences don’t show up anymore. You can also create your own collections by correcting the original sentences or by creating new sentences from scratch. You can find the step-by-step instruction on creating collections here – thanks to sindaco!

@alanf
I’m afraid you misunderstood volker’s point. Using “Boston” and “Tom” in sentences are totally okay, but they should not be asked to fill in the cloze exercises. For example from the English course, “Tom and Mary went to the same school in Boston” is a quite useful sentence to teach you English words such as “went”, “same” and “school”. But volker was bothered by exercises asking to fill in “Boston” or “Tom”.

For Romanian - remove all the sentences with people’s names and city names that don’t translate. I have had to enter Boston, Mary, Tom etc. multiple time

If you want to skip all the sentences that have clozes with a particular word, you can use the “Ignore” button and select the “Ignore all” option. This is only an option for Pro users.

I don’t know if this is the right place for bug reports but there’s something wonky with the focus in the “EDIT SENTENCE” menu: if I add a note for instance and press the “enter” key I expect it to trigger the SAVE button, but instead it removes the sentence from reviewing: 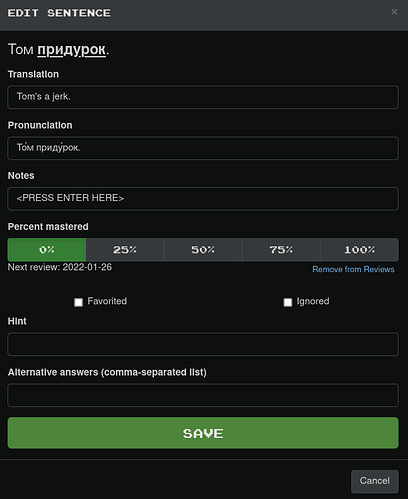 I think it’s a regression because I only noticed the issue recently and I often add notes. This is using Firefox 96.0.2.

As far as features are concerned, I’m sure I’m not the only one who has a lot of difficulty with some specific entries more than others, those words that just won’t stick in my brain. I wish there was a way to tag these words (either manually or maybe automatically if I fail them a lot) and then they would have a more intensive review schedule. Like every day for a week for instance. Probably not the right formula but I’d be curious to know what the other users think.

Beyond that I want to say that I really enjoy clozemaster, it’s become the centerpiece of my daily language learning routine.

if I add a note for instance and press the “enter” key I expect it to trigger the SAVE button, but instead it removes the sentence from reviewing

I can confirm this. “Remove from review” is a fairly new feature, and this is probably a side effect.

I have been thinking the same, that the system should be able to figure out which words are giving me most trouble and make me review them more often. Isn’t that what computers are for?

It looks like there’s now an option to remove a bunch of sentences from reviews at once (in “Manage X”) but it doesn’t do anything. It would be great if it would, I really dislike those over 10 000 reviews I’m seeing.

Be able to add nikkud (diacritics AKA,vowel points) to improve the Hebrew pronunciation. Which has a lot of problems because there are none, at all. The English equivalent would be to see words like - bass or read - is it base or bass? Red or reed? (Now imagine those words writen as: bss and rd. IS IT bass, base, boss, bess? Red? Read? Rod? Rad?)… Humans can guess by context, bass or base… Computers can’t… but ta da! That’s the Hebrew pronunciation using TTS without vowel points. (I imagine this an issue in other courses too. We should be able to do transliteration - for tts to read in settings).

Also other versions of cloze sentences, and games! would be good.

(And a crowdsourcing fix for those awful translations. The Hebrew course sounds like a 19th century woman (trying to do feminist Shakespeare) wrote them (of therefore present who hath doth proffered his headgear? Types of sentences) - I’ve heard the Turkish course was partially done by an antiSemitic religious nut. Some of the English sentences also read like they were written by a semi-literate English speaker (we kan haz foodies?)

You must know this is a big complaint. So the last suggestion -clozemaster PRO can create a collection, but can share it with an invite link… (or let scrowdsource vocab/sentences for personal collection… ) we are starting a language book club. We’d like to use clozemaster, but not everyone involved has pro).

And adding collections makes your offerings look larger,
Some languages are really sparce to begin with - they don’t even have the option of reading 19th century cloze ramblings! (Welsh and Yiddish have less than a 1,000 clozes each, most are multiple lines/ridiculously long - like this paragraph I just wrote)

Re: #3 (correction reports), you need to directly report to the sentence source, i.e., Tatoeba.org. Once Tatoeba corrects them, Clozemaster can download the latest version from Tatoeba and can update the courses. I used to report errors to Tatoeba, but I found the people on Tatoeba (especially admins and corpus maintainers) lack of knowledge and just wasting my time.

Sorry to hear that. I’ve been very lucky to find a very engaged Hindi contributor on the site who not only corrects their own sentences, but also corrects orphaned sentences - and even provides short explanations for idiomatic usages. I guess it really depends on how lucky you are with your language choice.

It would be awesome if we could search the sentences answered incorrectly multiple times. (10+ times, 5+ times etc). This combined with % mastered filter could create a powerful search tool for sentences to troubleshoot. There are some words/expressions that are particularly tricky for me to remember, and I am adding them to a collection currently, but that doesn’t let me distinguish the different levels of difficulty. As more and more sentences become available for review, being able to target those unrelenting sentences without having to manually manage them via collection / favorite would be really useful. I noticed that when I am reviewing a round history after a review session, it enables me to search for sentences for which I’ve answered incorrectly more than once. Can this be available more broadly?

Thanks for all the feedback everyone! Everything you post gets read, and we work to queue up as much as we can to get implemented in some way.

@simias @morbrorper thanks for letting us know! That Edit Sentence issue should now be resolved.

@hooetvee that “Remove from Review” feature is meant for essentially resetting a sentence so it’s treated as new sentence with no review date. Good point thought that it could be confused with the ignore feature which is meant to remove it from your queue so you no longer see it all. We’ll reconsider the wording there.

The question was what would we like to see - I answered. It’s not particularly patriotism. It just looks odd.

As b4, it doesn’t really worry me that much. I’m still kinda persuading myself that I’m Italian:-)

I like how in SpanishDict you can hold down a letter on the keyboard for a second or two and the accented letter automatically appears. It can be extremely convenient.

@SpringPaper3278 - This option is typically a function of your computer. Mac and iOS work with “hold down” keys to make accented letters - and I can attest it works just fine on this site. Windows uses convoluted and confusing key codes.

@Dcarl1, the key codes are indeed hard to remember, but Windows also gives you the option of using either predefined or customized keyboard layouts that let you use intuitive key combinations to type accented characters.

I have a PC and SpanishDict allows me to hold down letter for the accent. So, their code lets you do accents on a PC. (if I want an accent on different sites, I have to type in the acsii codes while holding down the ALT button)