"Pronunciation" field useless for Russian, but could be made useful

Russian spelling is nearly phonetic (one letter symbolizing one sound), and there are approximately as many characters in its alphabet (33) as in English (26). Therefore, learning to pronounce the language can be done in a finite and relatively short period of time, which makes transliteration a mostly unnecessary crutch. The biggest and most persistent obstacle for an English-speaking Russian learner is predicting where the stress falls within a word. While there are some patterns, for the most part, the location of the stress needs to be memorized along with the word.

I mention this because the “Pronunciation” field feels like a missed opportunity in that:

For example, here’s a Russian sentence:

and here’s its “pronuncation” (transliteration) according to Clozemaster:

Even someone who hasn’t studied Russian can probably pronounce the word от more or less correctly, namely like the combination “OT” in English. So this is an example of problem 1, unnecessary information.

But in fact, although the main pronunciation of the letter г is “g”, ого at the end of a word is pronounced “ovo”, not “ogo”. So this is an example of item 2: the pronunciation is wrong. Apparently, it was produced by an automated algorithm, and one that was too simple.

Worst of all, the biggest issues about pronouncing this sentence correctly, and the hardest to get right, are where the accent falls:

The way I deal with this requires the manual step of isolating the words whose stress pattern I don’t know, visiting them on Wiktionary (fortunately, the GUI makes this easy), and copying their accented forms into the “Notes” field. Then I can see them during a review after I’ve guessed the cloze word (or, in the case of the Android app, before I’ve guessed, which is one of the reasons I don’t use the Android app). So I have a workaround that is okay for me, since I am prepared to do this extra work. But it does make me wonder whether the “Pronunciation” field serves any use for Russian learners, and whether it could be improved.

Do the transliterations come from Tatoeba? It’s so odd to base them on the weird Latin typing system. Is it even used anywhere else?

When I feel like it, I basically do the same thing and enter my own transliteration so that I can see the stress. I’ve never seen a Romanization system that I’ve liked anyway, so this works for me.

If you play in the browser, you can always comment the sentence with the stress. I never thought to do it, but it’s not a bad idea. Similarly, @AlexG71 has added tons of definitions to entries in Polish and I’ve found them very helpful.

That being said, I’ve wished that there was a way to get from a given sentence to its discussion thread either from play mode or from the collection or both. On the other hand, maybe it’s not useful to the same degree for every language.

Thanks for the feedback! Agreed they aren’t particularly useful as they are - accents / showing the stress would be way more useful. We’re working on coming up with something better.

That being said, I’ve wished that there was a way to get from a given sentence to its discussion thread either from play mode or from the collection or both. 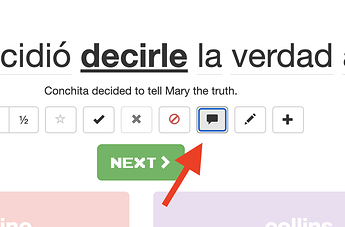 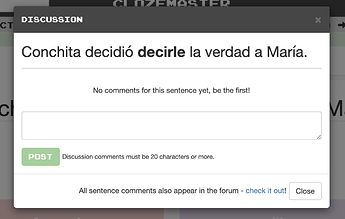 Do you have something else in mind? Good point about being able to do so from Manage Collection - we still need to get support for that added.

Oh, oops. I don’t use the browser a lot.

Never mind! I guess getting there via the app would be good, but maybe not so easy to display.

Ah good point about the app too - thanks for the feedback! The app does indeed tend to lag behind the website a bit, but we’re aiming to get the discussion support added there too at some point.

Do the transliterations come from Tatoeba?

No, they don’t. However, I don’t know where they do come from. @mike?

Do the transliterations come from Tatoeba?

We generated the existing transliterations on our end.

Here’s a sample of 100 sentences with machine generated accents/stress (it’s a Google Sheet that should open in the browser). It’s best option we’ve come up with so far, but unfortunately there are occasionally errors (we had our native Russian speakers go through and mark the sentences with an error - this sample has 94% correct).

At the moment we’re considering replacing the existing Pronunciation field transliterations with these machine generated stressed versions of the sentences. The occasional error is unfortunate, we’ll have to put a disclaimer that they’re machine generated, but I think it’ll still more useful than the existing transliterations as well as having nothing there. Our moderation team can also help correct pronunciation errors in reported sentences.

Curious to hear what you think!

We’ll of course continue working on coming up with better solutions.

I like the idea. Would it be possible for someone to add a “Comments” column to the Google Sheet with a description of the errors? (Unfortunately, it’s too laborious a process for me to identify them myself.) I’d like to see whether they follow any patterns. For instance, I see that the accent in “Бостона” (“Boston” in the genitive) was misplaced. If it turns out that proper nouns (or proper nouns in the genitive) are susceptible to this kind of error, then (a) it would be easier to correct and (b) it would be easier for the user to learn to ignore. If you could add another 100 sentences to the list, that would also help make patterns stand out.

Quick update on this: for the Russian from English Fast Track we’ve added lists of stressed lemmas (dictionary form of the words) to the pronunciation field. Curious to hear what you think and whether you think it’s worth expanding to other collections. This approach shouldn’t run the risk of being incorrect as described above, just perhaps not as useful as having a stressed version of the sentence text. We might still be able to do better, just figuring out how and how best to integrate into the UI. 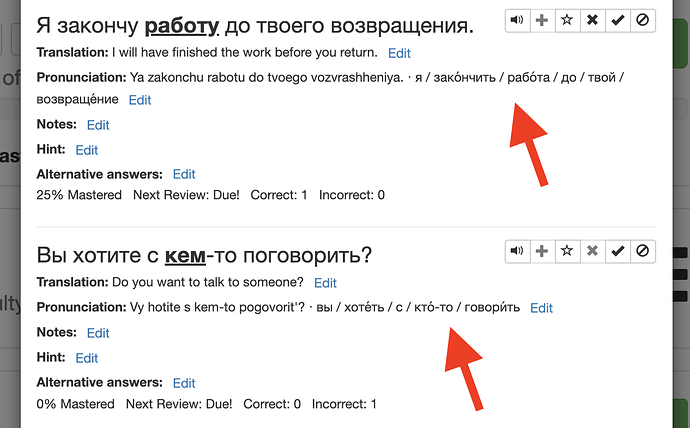 A related question: Does anyone find the transliterations useful? For example, in the screenshot above, the Ya zakonchu... part of the pronunciation in the first sentence.

As for the transliterations, I would expect most people who are actually studying the language not to find them useful. Russian is mostly phonetic, and even where it isn’t, it’s simple to predict the pronunciation given the spelling. It’s the placement of the accent that’s tricky. But let’s see what other people say.

@mike Are there any updates on this? I’m still manually adding the cloze word with stress mark to the “Notes” field every time that the stress is not obvious (and it quite often isn’t).

You added this poor “functionality” to ENG RUS but PL RUS is in shambles. Theres tons of wrongly translated sentences, most containing wrong grammatical gender. Then theres no pronunciation like you added to ENG RUS, and do i really have to put stress on ENGLISH pronunciation in POLISH RUSSIAN course? Shouldnt it have Polish pronunciation instead? I honestly have no idea what are you working on instead when such basics are so underdeveloped. Creating a base with a script or algorythm is a good idea but it is not flawless, you have to spend time on fixing any imperfections, or should i call them, tragic errors.
@mike

@alanf what collection are you playing at the moment? For the Fast Track there’s now a button that loads more information about the sentence, including the stress for individual words, screenshot:

We’re still working on expanding that to other collections, and we’ll likely either use that to replace the existing pronunciation field or use another possible option we’re still getting feedback on. Curious to hear what you think.

@LanguageGODLIKE learning Polish from Russian does indeed need some attention. Thanks for letting us know about the issues. At the moment we’re working primarily on building the UIs so we can expand the moderator team as well as get them more involved working to resolve issues like the ones you described. We probably put the cart before the horse in making Polish from Russian available too soon, but hopefully we can catch up and make the necessary improvements.

@mike this is great news!

You were probably going to add a screenshot, but here’s mine: 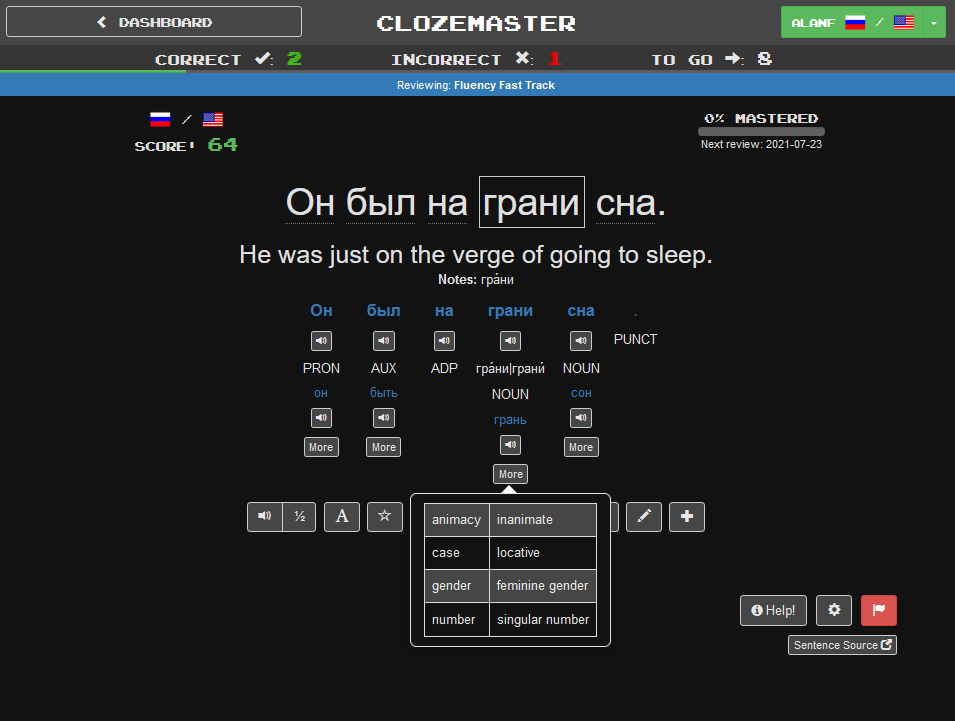 In general, this is great. It so happens that for this particular cloze word, there are two pronunciations for the given spelling, as can be seen from the Wiktionary page: грани - Wiktionary One pronunciation (гра́ни) is for the noun (genitive/dative/prepositional singular and nominative/accusative plural), and one (грани́) is for the verb (second-person singular imperative imperfective). Both are shown on the Clozemaster page. It should be possible, given the knowledge that this is a noun, to only show the first pronunciation. But that’s a small thing. (Another small thing: Wiktionary labels this word prepositional, and I agree, but Clozemaster calls it locative.) For me, this added functionality is a big step forward. Since I play a variety of collections other than Fast Track, I’m hoping you’ll soon be adding it to them as well.

How long have you offered this functionality? And was it announced anywhere? I don’t see it on the “News and Updates” part of the forum. It would be nice to promote new features like these so people can take advantage of them and spread the word to other potential users.

@alanf thanks for posting the screenshot!

I did indeed forget.

Glad to hear about the grammar feature! We are indeed working on getting support for it added for more collections + languages. It’s been around a few months. We’re rolling it out slowly, which is why it wasn’t announced anywhere. Agreed we need to do better announcing and promoting new features like this.

Thanks for the feedback!

The pronunciation field now contains exactly the information I had been hoping for. Many, many thanks!

The problem is that even though the pronunciation field for some sentences has been updated with the information I need, I never know before I open a sentence (that is, click on the pencil icon) whether this particular sentence has been updated. If it has been, I can use it, but if it hasn’t, I need to go to Wiktionary. Since I can’t easily go to Wiktionary from the dialog that opens when I edit a sentence, that means I have to go there beforehand. So until I know that all the pronunciations are updated, I’m going to have to keep going right to Wiktionary to get the pronunciations. This means that all the work that has been invested is not helping me yet.