Poor old Tom or should I say "Tommaso"

Just briefly to wish “Tommaso” a happier time on the Italian course (in prison, lost a leg and more!) and to thank all Cloze friends for all my many up-cheers! May you enjoy however you celebrate 25th December. A dopo, stammi bene!

Not for Tom it won’t be. For you see, I have pieced together the entire tawdry tale; a story of medical tragedy, love and betrayal. Brace yourselves for the abbreviated story of Tom, Mary, and the diabolical third party in this whole affair, John: 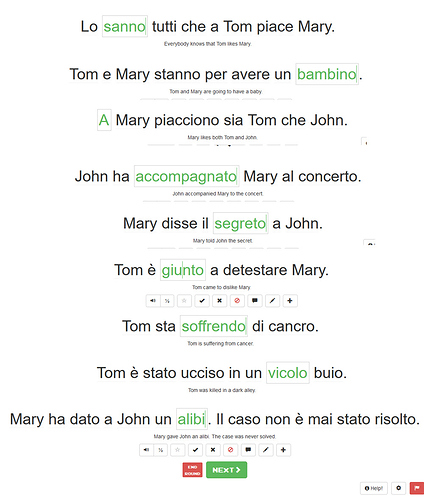 (OK, I may have improvised that last one a little. But the rest are real.)

Happy holidays to all. Except Tom, since it’s too late for him.

LuciusVorenusX - oh this tawdry tale is the best!! There was another FT earlier today about “this thingy being much larger than that thingy” but I won’t go into detail. Grazie ai santi it wasn’t about poor Tom, I doubt he would have coped with the ultimate umiliazione in private with mischievous Mary!

Happy hols to one and all!

Ps. On a positive note, perhaps the bullet missed him in the dark alley, John is arrested, Mary repents and buys Tom a prosthetic for 2021.

I fear you’re right - the new Interlingua version of the story states:

Ahia, adesso Tom is not only smaller than John but completely nudo! Will the underworld cope, we murmur. (What prezackly is Interlingue, if I may be so bold?) Have a goodly festive day!

Interligue is a Conlang, or artificially constructed language. I thought it was the same conlang as Interlingua, but apparently it isn’t, which is probably unnecessarily confusing. Interlingue was originally called “Occidental” and was invented by an Estonian-based German man 100 years ago, but includes minimal cribbing from Deutsch (“spegul” for mirror) and none from Estonian that I can detect, being essentially a jam session between Spanish, French, Italian, Latin and English. It flows very simply and anyone whose mother tongue derives somewhat from Latin could grasp it - which is the point, I guess. Like other some non-English-native conlang creators (Toki Pona) it uses English forms in a slightly awkward way, and apparently the creator of Interlingue was very concerned with “logical consistency” in the spelling and grammar. He didn’t do a bad job at all - this language is definitely worth the three weeks of holiday I’m going to devote to it - but unfortunately his striving for perfection may have contributed to his being domiciled in an Estonian psychiatric prison for the duration of WW2, where he died.

sorry, that’s a lot of explaining.

Thank you so much for a welcome and interesting jam session. Appreciated! As I’ve just started a little Latin with Duo (merely to keep my streak) and cos it’s fascinating, I think this one will have to wait a while. Now to attack my Reviews while drinking Lavazza coffee on this jolly Boxing Day. Be well!

Mystery solved… or is it???

Ciao JioMc. Bit quiet with Tom right now, he’s going through a rather dull phase: Tom è un eroe. Tom è in cucina. (Tom is a hero, Tom is in the kitchen). C’mon Tom, we want some pain n suffering to go with the Clitics!

Buon anno a tutti! Good news all round for fans of Tom. He’s evidently done well in clink and now… “Tom is a detective”!! Pink Panther better beware

Nota: Decency does not permit me to repeat the sequence of Tom’s that followed except that a “Dennis” has appeared to challenge him size-wise:-DD

Oh no. Tom has been sacked already but wait, he is now an angel! Such a lofty promotion is heartwarming to say the least, for a uni-gamba, ex-con

You can thank a guy called Ric Berger for the confusion (he proposed the name change back in the late 40s and really pushed for it) plus the Soviet Union. After the war when the Iron Curtain was going up, the Occidentalists at the time (Occidental being the original name of the language) noted to their chagrin that the Occidental-Union now shared the exact same name as an anti-Soviet group and the name Occidental itself was seen there as…well, the West.

As a result we have the original Interlingua (Interlingua de Peano or Latino sine Flexione), Interlingue which was baptised as such in 1949, followed soon by Interlingua by the IALA! It’s no surprise that Occidental is the name people usually use to refer to it to avoid confusion.

One nice side effect though is that Interlingue makes a fantastic hashtag as nobody else uses it.

@JioMc Update-Tom!
Tom is a virgin. Tom is growing up, yay! Dan seems to be lurking somewhere, obviously keeping his powder dry.