I was doing some work with verb forms, which I’m great at recognizing, but struggle with knowing the exact form of every single of them. I know all of the important ones, I’d like to believe, but I always seem to discover a verb or tense that I specifically struggle with. I recently discovered I couldn’t conjugate the verb ‘cuocere’ to save my life, which is exciting to me, because I wouldn’t have identified that as quickly if I was doing Clozemaster alone. During one of the lessons, I discovered something else that was interesting.

I’m quite familiar with the verb ‘partire’. It’s a tricky one, because it means ‘to leave’, as in ‘depart’, however, in Italian, we already have several ways to say ‘leave’ - lasciare, andarsene, uscire, each with different connotations. ‘Lasciare’ could mean ‘to leave something’ while only sometimes it means ‘to leave a place’. ‘Uscire’ could mean to leave, but more accurately, means, ‘to go out’; and it carries with itself its own set of different connotations. It could mean to go out on a date - the same way we say “I went out with her” in English. Which I find pretty cool - that two verbs used idiomatically, are identical in usage and connotation across English and Italian. It makes me wonder, perhaps it came from Latin? Maybe people who spoke Latin went on dates, and also used the verb “to go out” to describe it. Who knows.

“Partire” could also mean ‘to start’ but in a different way from iniziare or cominciare. It usually applies to a start of a journey, or ‘to start leaving for’ some place. I pick these connotations up by reading what I call ‘native Italian’ - meaning, Italian that is written by Italians, for Italians, and not for the sake of learners. It’s one of the only ways you can improve as one edges towards an advanced level.

Anyways, onto my point. Partire is conjugated like this: parto, parti, parte, partiamo, partite, partono. That’s just presente indicativo. Of course, it is conjugated in every other tense.

So, imagine my surprise when I’m doing my verb quiz, and it asks me to conjugate “Lui + Partire” and tells me I’m wrong when I say “parte”.

It tells me the right word is “partisce”. I had to look it up. It’s not in Reverso, save for a sentence or two. It looks like it means “split” or “divide”, which makes sense. It would conjugate like this: Partisco, partisci, partisce, and then I don’t know.

Which leads me to my question:

Is there an alternate meaning for ‘partire’ that means ‘to split’ that results in an alternate conjugation table?

I know the answer has to be yes, because here it is:

It would be the first time I’ve encountered something like this - two alternate conjugations for the same verb.

Not everyone all at once! No need to kick down my door!! Just kidding, I know full well that not every one of my questions has an obvious answer. However, I have satiated myself for those of you who are curious. I found a blog:

Tumblr is a place to express yourself, discover yourself, and bond over the stuff you love. It's where your interests connect you with your people.

This is what it states:

Some verbs like applaudire (to applaud), mentire (to lie), inghiottire (to swallow), assorbire (to absorb), nutrire (to feed), have both the form with the -isc- but also the one without it. At times the two versions may have the same meaning, while others the meaning of the verb might change:
mentire

It looks as though my suspicions were correct according to this source.

How wild is that? Parto and partisco are both conjugations of ‘partire’, but have different meanings. I dont think they teach you that in regular italian courses.

@Vito89 sorry, I saw your message, but I couldn’t answer right away, and then I forgot.

So, the main meaning nowaday of “partire” is “to depart”, or also “to start an activity”, and it uses the “parto, parti, parte” pattern.

The original meaning of “to part”, “to separate”, “to divide in parts”, is still there according to vocabularies, but it is rarely used, and it normally uses the the “partisco, partisci, partisce” pattern.

But it is much more common to use “spartire” or “ripartire” when the sense is “to divide in parts”.

Thankyou Mike. I am at the point in my learning where I am concerned with words that may be more rare. Not necessarily for speaking, but for listening and reading.

The question is - are there any other verbs that are similar?

Similar in the sense that they can be conjugated in two different ways? Or that have different meaning in the two conjugations?

I cannot think at the moment of another case of the latter, but as for the list of verb with the double conjugation here is one article that may be of use: 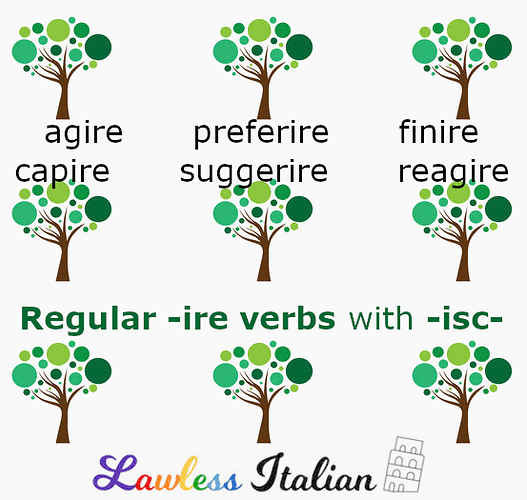 Most regular Italian verbs that end in -ire require -isc- in four of their conjugations. - Lawless Italian

I cannot vouch for the accuracy though! For example I have only heard “tossire” conjugated as “tossisco, tossisci” (although it is rarely used in the present indicative anyway, it is more likely used as " sto tossendo", as “tossisco” feels awkward to say).

And “apparire” has been mispelled.