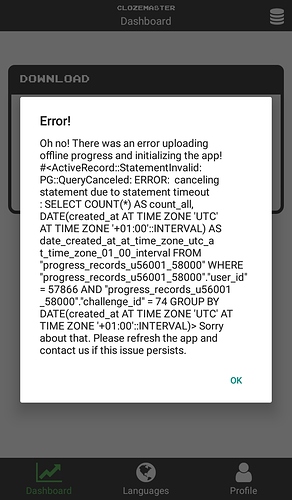 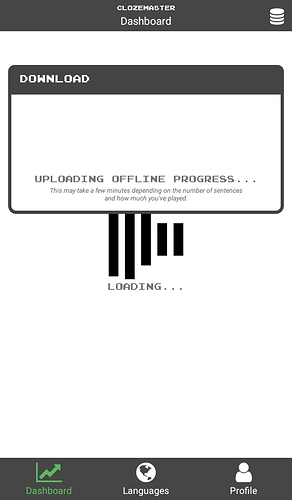 Screenshot_20190227-042235_Clozemaster720×1232 68.2 KB
After successful usage of the offline mobile fast tracks for some weeks, I’ve encountered a persistent failure to sync upon the initialization of the app. It first attempts to upload offline progress without any numbers like usual, then the error message pops up. If ok is tapped, the loops is simple continued without end. If the app is started without internet access, offline mode an be used without error.

I am not entirely sure of the initial cause of the problem, although it may have something to do having updated sentences via desktop between the times of syncing on mobile, which I admit is a somewhat unusual usage case. Crossing time zones physically and VPN usage also are of concern.

It is possible to circumvent this by entirely deleting the app, but this is hardly a functional workaround because all progress is lost and tracks need to be manually re-downloaded, but this may be useful for testing. At this point I wouldn’t want to do that from the amount of sentences I’ve gotten to so far, though.

1 Like
Failed sync wouldn't let me out, forcing me to reinstall the app