Failed sync wouldn't let me out, forcing me to reinstall the app

I’ve often seen that sync operations take a while and seem fragile. Yesterday, I performed a sync on my Android phone at a place that had wifi access, though perhaps not as stable as at my house. The app got stuck in a sync operation. I forced the app to stop, and then restarted it, but every time it started, it wouldn’t get out of the sync loop – unless I turned off internet access. But then it proved impossible to sync. I eventually had to delete and reinstall the app, thereby losing all the sentences I had done that day.

Have you considered any of the following?

Note that the symptoms were similar to the ones mentioned in this post from a year ago: 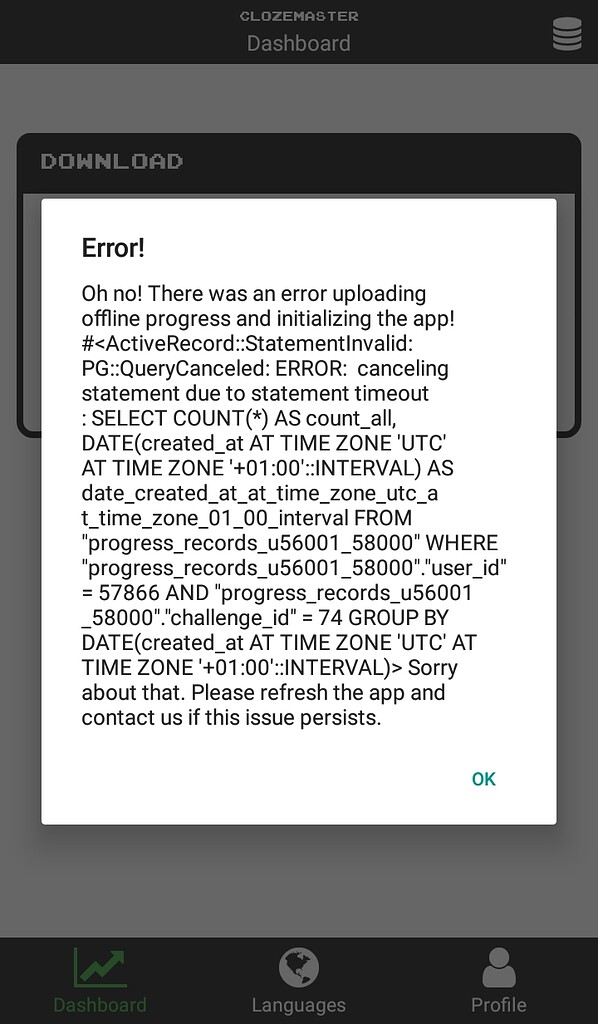 After successful usage of the offline mobile fast tracks for some weeks, I’ve encountered a persistent failure to sync upon the initialization of the app. It first attempts to upload offline progress without any numbers like usual, then the error...

but the error dialog was not displayed.

Sorry for the trouble! The sync process definitely has room for improvement like you mentioned, and we’re working on making it significantly better in the next major release.

At the moment the plan is to make it optional (rather than forced when connected to wifi, you can decide when to sync), add a cancel process, and make it way faster. In the current implementation sentences are uploaded in batches but processed/synced/updated individually which can be slow. We should be able to make performance gains there as well as other places.

Apologies again for the trouble. Any other issues in the meantime please be sure to let me know. Thanks again!

It would be great to hear about any further developments on the sync issue. I never managed to sync, especially when trying to plain on iOs. It freezes and loops and I’m forced to reinstall the app. It was actually one of the features that attracted to pro in the first place which haven’t worked out so far.

This particular problem had me abandon the app in favour of using the web interface. I’m glad that is is being worked on.
I went some weeks without syncing, which was a great demotivation, though of course not enough to stop entirely!

Thanks for letting us know! It is indeed being worked on like you mentioned - the goal is to have all the collections be downloadable / playable offline, and the syncing much smoother. Will post an update as we get closer!