My idea for a new pro feature: ambient mode

I’ve been playing this video a lot recently when working out: 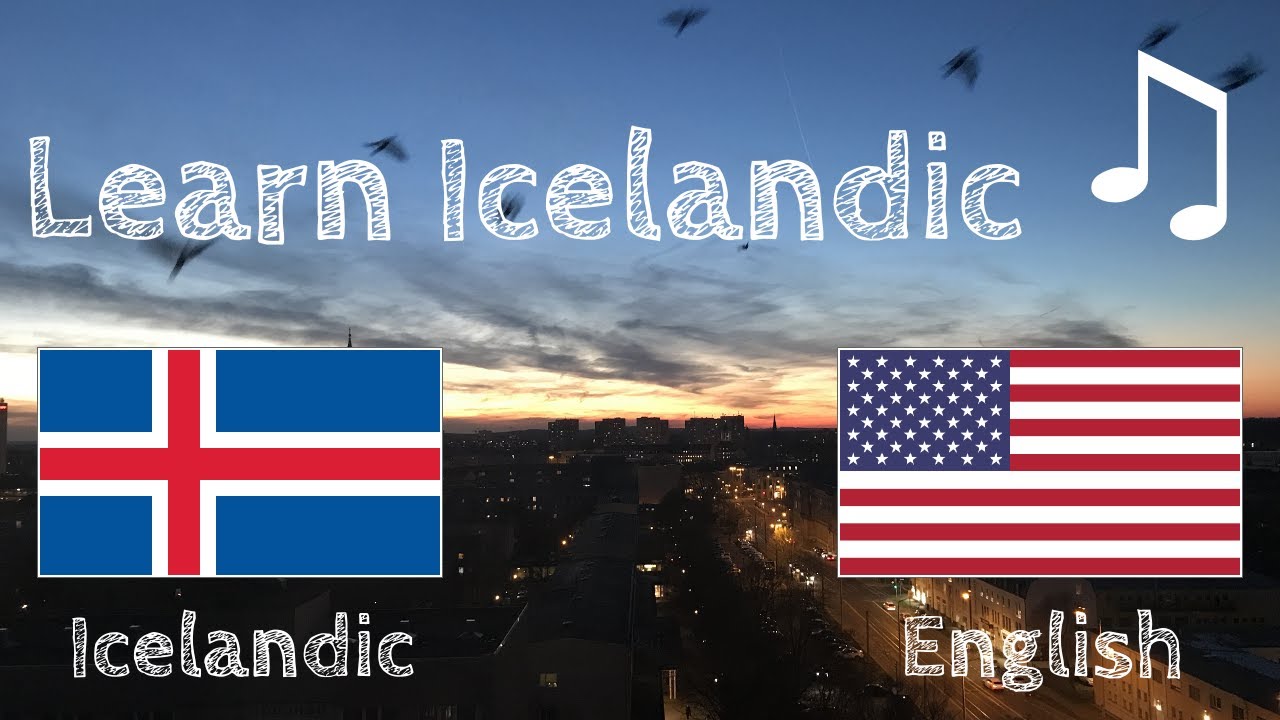 It’s one of those 8-hour videos with the target language and ambient music, in this case Icelandic. I was thinking how I’d love to do the same with my Clozemaster setup but that would require leaning over to press keys and things that would get in the way.

So that gave me an idea: what if we had an ambient mode where Clozemaster would start answering the questions automatically and then repeating the audio three times along with some ambient music in the background? None of the progress would be saved - it would make a save point and start from there. Could also give just a tiny amount of points like ten per minute for a maximum of an hour so that nobody would feel tempted to try it to run up points but also give people a sense that their progress listening to the language is being recognized too.

You can already do almost exactly the same using the Clozemaster Radio feature, although it seems you can’t play music in the background when doing so, it seems to stop playback for one or the other, so you’d be missing the nice ambient aspect, but perhaps that could easily be enabled/added to the current playback feature, I don’t know. I even tried to have a separate audio app open in a split screen, but to no avail.

Anyway, in case you’re not yet aware of the Clozemaster Radio feature, open the app, and go to “Play” a collection: 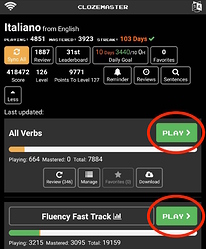 Then instead of proceeding to “play” the collection as normal, click on “Radio” in the top right corner: 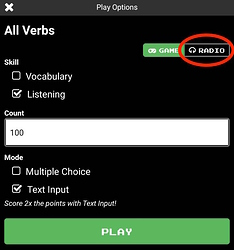 This will bring up the Clozemaster Radio feature, by just pressing “Listen” to continue: 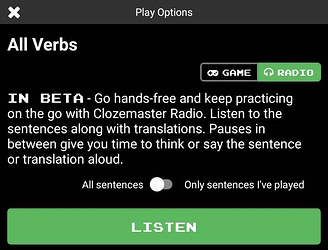 To adjust this, click on the little cog wheel in the top right corner to adjust the default settings: 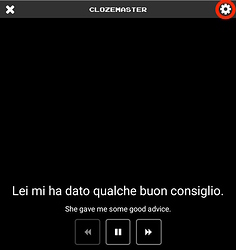 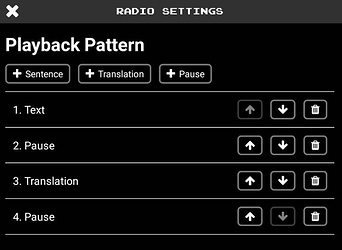 Now, you’ll want to move the “Translation” to the top (using the “up” arrow next to it), move a “pause” up too, and add two further iterations of the “Sentence” (the “text” in your target language) by clicking on “+ Sentece”, and perhaps another couple of pauses (or perhaps remove them altogether), so you end up with something like this: 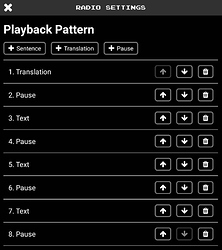 So if playback would not be interrupted by starting playback of ambient music in another app, I reckon this is more or less what you were after? Sorry if I misunderstood.

It’s great anyway to know there are such videos available, thank you, I might need to search for some of my own, or perhaps just make a start with Icelandic, I’ve already listened to a lot of that one by now

Crazy! That’s pretty much what I was thinking of. I didn’t notice that it was there as I use Clozemaster for the most part on the computer and that’s the only screen that’s large enough to see the text from far away when working out. So I guess if the Radio feature ever made it to the browser it would be perfect.

After using Radio mode a lot there’s one feature I’d love to see added: setting a time limit. I like to listen to radio mode just before falling asleep and shutting it off just as I get sleepy is always a challenge. Would be great to be able to set it to 15 minutes and forget about it.

Thanks for the input! Please see A timer to automatically pause the Radio function - a timer is currently available for Radio on iOS, and we should have it out for Android within the next few weeks.

So I guess if the Radio feature ever made it to the browser it would be perfect.

We don’t have any plans to develop Radio for the web at the moment / in the short term, however!

this was a “proof of concept”, isn’t linked to from anywhere at the moment, and it might break in the future - try https://www.clozemaster.com/l/isl-eng/public-radio. Curious to hear what you think!

Edit: Note! Clicking the link above will add Icelandic from English to the language pairings you’re playing

this was a “proof of concept”, isn’t linked to from anywhere at the moment, and it might break in the future - try https://www.clozemaster.com/l/isl-eng/public-radio . Curious to hear what you think!

This is incredible, thank you! I just tried out the Italian version, really awesome to be able to access from web (even if not customisable like on the app).

I don’t know if this depends on my OS/browser set up in any way, but I just wanted to point out, that while the spoken Italian sentences sound very human-like, most of the English ones are absolutely hilarious

At best they just sound robotic, but some of them sound like robots submerged under the sea, with bubbles coming from their virtual mouths while they speak, or robots laughing so maniacally while speaking, that you can’t even make out what they say, or like robots singing, or like really ancient robots.

This is not intended as bad feedback in any way, I really appreciate the “proof of concept” web version as it is, it just made me chuckle quite a lot to hear some of them

And it actually helps to keep your attention piqued, rather than otherwise perhaps just zoning out and having the Radio become some background murmur you’re not consciously paying attention to, so perhaps it’s even a useful feature from a didactical standpoint

Edit: Wow, I just have to add, I just heard a robot who spoke the English sentence like the chiming of church bells or those old clocks that strike every quarter of an hour. No idea what they said, but I didn’t even know that could be done, I’m so intrigued by all of them

Edit 2: Ok, so first feature request (besides any eventual customisable order, pauses, repetitions etc. like on the app), which hopefully shouldn’t be too onerous: a “pause” feature, so you don’t just have to close & re-open the tab/page (especially since it’s not linked to from anywhere at the moment), but can briefly pause it to take care of something, and then continue again easily.

I’m commenting here on the “proof of concept” feature of Radio Mode on the web.

I’ve never used this on the mobile app, but I found it quite interesting to try on the web. It’s something I could definitely see myself using.

As @sindaco has mentioned, the English voices are … funny. Also, I agree also that the rotation through a variety of them, from robotic, through British to American, is indeed something that keeps your attention as you wait to see what the next one will sound like.

The only thing I didn’t like, was that I found that back on the main Clozemaster site I had now happily started learning Icelandic from English!

It’s not a major issue, as I’ve gone in and deleted the announcement from my Clozemaster Profile page (which we can now do thanks to the feature announced a few weeks ago), and I deleted the language pairing from my list (together with other language pairings I accidentally started when playing around with the proof of concept feature’s URL).

However, if it went from “proof of concept” to a main feature, so that it were only possible to use the web Radio Mode from an existing language pairing, then that would be a bonus.

The only thing I didn’t like, was that I found that back on the main Clozemaster site I had now happily started learning Icelandic from English!

Aaand the same just happened to me

The first time I’d edited mike’s link to Italian before pressing “play”, but, due to there not being a possiblity to pause, when I wanted to continue listening to the Radio after a brief intermission, without paying any attention, I had again clicked on mike’s link here, instead of my own link to the Italian version, and thus suddenly started learning Icelandic too, and even got a “high five” for it

Sorry about Icelandic getting add to your list of language pairings! Added an edit/note to my comment above. The English voices are selected at random at the moment, and there can indeed be some weird ones

It’s something I could definitely see myself using.

Good to know! Perhaps we’ll put a bit more time into it. If anyone else thinks they’d find it useful via the web as well please let me know!

a timer is currently available for Radio on iOS, and we should have it out for Android within the next few weeks

I’m still eagerly waiting for the update. Version 2.7.6 from November 11 last year is the latest available on the app store.