I think the Listening skill, which is an option besides Vocabulary and Speaking, is too easy. I think it could be made more challenging and rewarding by not displaying the sentence and translation immediately after the text has been read out; they should only be displayed after user confirmation. This would allow the learner to listen to the sentence again and again, to figure out what was said and what it means, in case it’s not immediately obvious.

Ciao @morbrorper Oh, for moment I thought you meant the latest “real life” listening skill which I battle with but absolutely love.

I thought you could turn the Listening translation off. Perhaps not, will have another look.

Ps. Incidentally I’m told that “Tutti i gusti sono gusti” does need that “i”.

I thought you could turn the Listening translation off.

I overlooked that option; thanks for pointing it out!

I tried to delete this reply but kept getting an “Internal Server Error”. Please disregard; it was written too soon after getting up this morning.

I know the feeling. It takes me a couple of Lavazza’s to get into gear.

I always use listening mode. The way I’ve found it to be most effective is if I close my eyes/look away from the screen and just replay the sentence until I think I understand it, and I only fill in the blank if I understood the whole sentence. I just intentionally enter a blank if I didn’t understand the whole sentence. I also repeat the sentence out loud until I can say it perfectly at the same pace as the TTS.

It’s probably the most hardcore way to do clozemaster because it takes me a lot longer per sentence, but my listening and speaking skills are skyrocketing by doing it this way.

I’ve only started using Listening recently, when I took up Portuguese from English, and I must say I’m impressed with the effects on my learning. I wish I had started like this with German, which is a language you perhaps can’t learn word by word.

As I’ve said before, it’s a shame though that one cannot separate the progress made in the Listening and Vocabulary skills, respectively. I would like to run the two skills in parallel, but that doesn’t really work. My plan now is to quickly run through the FFT in Listening, and switch to Vocabulary before the review reruns start hitting me. I have been thinking of registering a separate account for that purpose, but I’m not sure it’s a good idea.

I also close my eyes, or look away, but that actually gets a bit tiring in the long run.

I’ve ended up with a duplicate post I can’t delete and I see I’m the second person to mention that on this thread. @mike Is there a problem with the delete button?

Totally agree with @endycj that the best way to use the Listening feature is to not look at the sentence until you’ve played it enough times to fully understand it, or admitted defeat! The cloze word is incidental to the real challenge of understanding the whole sentence, or at least the gist.

I love the Listening function here so much that I feel bad for everyone who doesn’t have a paid account. If your aim is to understand spoken language and not just be able to read/write, and you can afford a few dollars a month, it is SO worthwhile. I’ve recently discovered the Radio function is also brilliant for making good use of time in the car.

@morbrorper I have a mild neck injury from a car accident and I’m supposed to do a lot of neck exercises, so for me having to look away from the screen is a bonus! I used to deliberately look left for one sentence, up for the next one and right for the third. I do however like your idea of not having the sentence or translation displayed at all at first (and your idea from a previous post of having a vocabulary option where only the translation would be displayed at first, so you had a chance to construct the whole sentence yourself - I think that was your idea, anyway).

Hi endycj, I do much the same. Always use Listening and always say the sentence out loud. During “isolation” it’s also a good way to hear a voice, even if it’s your own

@kadrian wrt the deleting of the posts, that was raised here too, and mike said they were working on it, so hopefully that will be resolve in the not too distant future

As for the Listening skill, even though I only discovered it a couple of weeks ago, it’s become one of my favourite features of Clozemaster, together with the Speaking skill. I tend to use “Listening” the first time I work my way through a new batch of clozes. Then I’ll use “Speaking” in the reviews, making sure to read out the whole sentence as I do so.

While for a language you’re already quite familiar with, the Listening skill might currently feel too easy, I actually think it’s very useful as is for languages which you’re completely unfamiliar with, where it helps to see the characters (especially if they’re different to ones you’re used to) and understand the pronunciation and which parts correspond to different words. I tried this for example with Greek. I know the alphabet, but that’s about it. As such I was using “Listening” combined with “Multiple choice”, just to see if I could pick out which word was being said. And while that worked well most of the times, some times that was already too hard (though I guess it didn’t help that I still had the audio on 1.5x, which I am quite comfortable with for Italian).

This is again one aspect where I feel Clozemaster excels. It offers great ways to incrementally adjust the difficulty as you familliarise yourself more with the target language(s), and you have all the different “Playing” and “Reviewing” methods at your disposal. As such, I would hope any currently present functionality would be maintained, when adding any more challenging options for hardcore pros 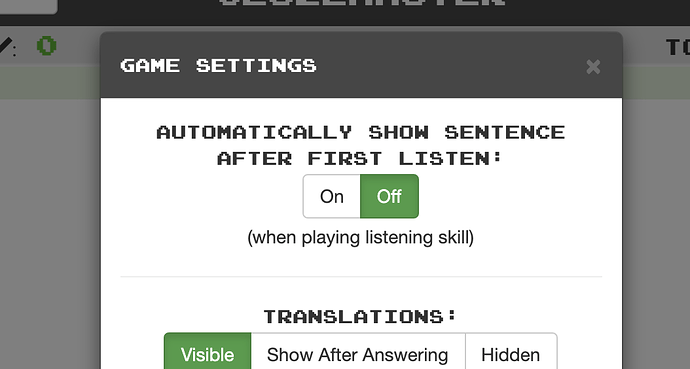 New listening mode default! You can now play the sentence audio multiple times before seeing it. (space) and (enter) are hotkeys. You can also switch back to the “auto show sentence after first play” via the game settings. Thanks for all the feedback, curious to hear what you think! We may switch the default back to auto play depending on additional feedback, but the game setting will persist.

I just noticed, many thanks!

My first thoughts: The button to the left feels a bit redundant, given the bigger button above, so maybe it could be repurposed as “play at half speed” (possibly with a points-reduction penalty).

Other than that, great! No more having to look away or close my eyes.

“(space)” doesn’t have any intuitive meaning to me and I agree with @morbroper that it might be more useful if that button did something different to the one above it.

(I saw these options for the first time playing a new collection I just created, and I thought I’d done something wrong that caused them to appear!)

A helpful feature - thank you.

Thank you Mike for staying in touch with us. Off to try it now.

Consumer feedback: the purpose of this change wasn’t clear at first…even though I was aware of this thread, i thought I had stumbled on some glitch…

And, once i figured out how it worked, as to the feature of not giving the sentence and blank until you give another ‘return’… it just seems to slow me down in requiring one more thing to do for each sentence.

So, no strong feelings, but net net, a ‘no’ vote from me.

Tried it but I’ve left it “on” as I’m used to it and don’t feel it detracts from any learning. Bit like my security blanket;-)

Thanks for adding this. I now intend to use the listening skill extensively.

And, once i figured out how it worked, as to the feature of not giving the sentence and blank until you give another ‘return’… it just seems to slow me down in requiring one more thing to do for each sentence.

So, no strong feelings, but net net, a ‘no’ vote from me.

But as with most things… you can turn it off. Go to the Gear icon at the bottom right when playing and ensure that the first setting is On. That will ensure that it performs the same was as it has previously: 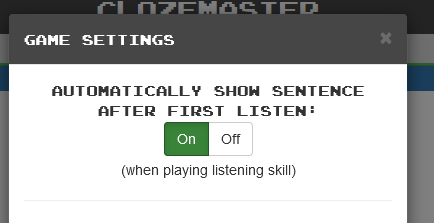 “(space)” doesn’t have any intuitive meaning to me

It didn’t for me at first either, but I’ve become a big fan of it now. I haven’t tired it on a mobile device, but it is very fast and convenient for a keyboard user like me.