The TTS for (user) cloze collections is the system’s voice, which sounds pretty bad in comparison to the one Clozemaster uses. For Mandarin, this is critical, because tones are best practiced hearing the sentence, by imitation, and the way of speaking of the (Windows) system TTS is very far from natural.

Is there anything that can be done about this? Maybe the TTS of clozemaster could be installed as a system voice somehow?

Clozemaster voices should now be available for custom collections as well.

Many thanks for this update!

This greatly increases the potential of custom collections!

Hi @mike ,
Today I wanted to try out the feature on a custom collection I made.
Personally I only see the following: 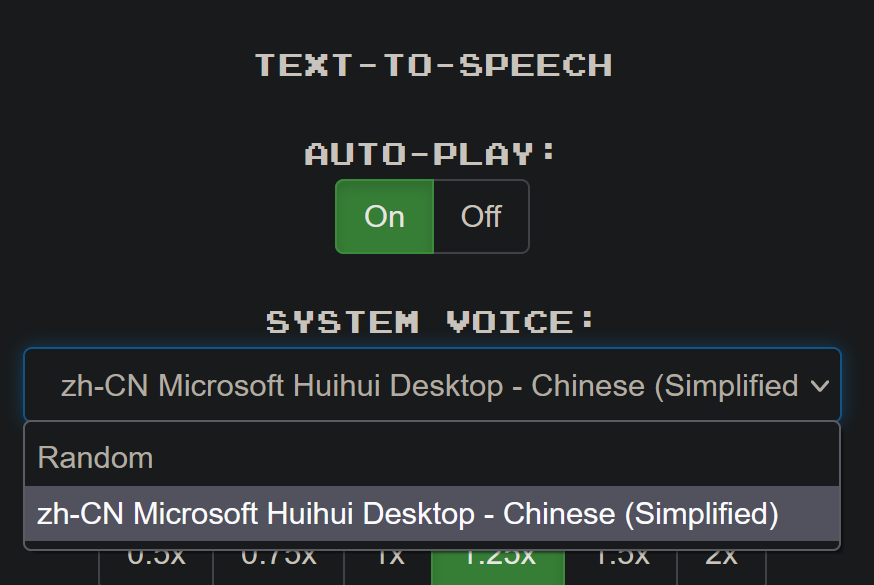 The only available choice is a voice I installed on my computer; should I look elsewhere? (The “random” choice uses this only choice, as expected)

/edit: I tried on multiple custom collections, including that of others, as well as a new one I just created for testing purposes.

Thanks for the follow up! And sorry about that, I should have clarified - available for sentences added/copied from Clozemaster (via sentence search or while managing/playing a collection). The TTS is essentially copied over to the custom collection. We don’t yet have it available for custom sentences. The reason is that generating the TTS and storing the audio files can get expensive over time, and we’re wary of bulk import being used to rack up unexpected costs. We’re considering implementing a system of credits for TTS where the audio will be generated for N sentences/characters before you can purchase more credits to be able add audio for more sentences. Curious to hear what you think of this approach. Is there a particular collection for which you’d like the Clozemaster voices at the moment? We can get them added manually for now.

Makes plenty of sense, thanks for clarifying. Since you kindly offer, I’d be interested to have audio files generated for the following collection in Mandarin Chinese (a collection for common expressions):

If you were to receive other demands for this feature, I would like to suggest an other approach for a more scalable method than manually handling:

Suppose a user wants to play 10 new sentences for a custom collection. He could have the option to have them generated from Clozemaster’s side, and downloaded to his computer. The files would not be stored on Clozemaster’s side. If I’m not mistaken, some collections can be downloaded already. I guess you might also have to look at the terms and conditions of the TTS service you’re using.

To limit traffic demands on Clozemaster’s side, there could additionally be:

Your approach also seems sound to me, but I’m not sure if the possibility of exploit of the feature (generating lots of audio files for collections no one will eventually play) is worthy of introducing additional paying features, especially for users who already subscribed as pro users. Entering in the details, I would argue there could be a limited periodical (eg weekly) free budget for pro subscribers, and perhaps collections that haven’t been played in a while could have their audio deleted (as some free hosting websites do to save up space).

Many thanks & yours faithfully