In the last day or two, text-to-speech has stopped working for my Mandarin Chinese custom collections on Android, even though my phone has a voice installed. Now I can only play in Vocabulary mode, which I don’t like to do.

Is there anything I can do about this? It had been working fine.

It doesn’t appear to be just you. I just (briefly) enrolled in Mandarin, set up a custom collection (albeit with not the first clue of what the symbols sounded like or meant), and found that when I switched over to the Android app:

In Fluency Fast Track I did have the option, and did get the sound normally.

I checked the Play Store to see whether there was an update available, but Play Store advised that the last update was 26 Oct 2020, which was the one I had installed.

Edit: I found this to also be true in Web, which probably rules out Android as the culprit.

I would say that something has broken on the server side in relation to Mandarin. (It still works normally in Italian, for example.)

Thanks for letting us know! The text-to-speech for custom collections still comes from your device. We’re working on adding a way to add text-to-speech that’s available cross device like it is for the Clozemaster collections. In the meantime @kadrian - has anything changed on your device? Any updates? You mentioned your phone has a voice installed - might you be able to send a screenshot?

@LuciusVorenusX it sounds like your device might not have a Mandarin voice available which is why there was no listening option for the custom collection, whereas it does for Italian.

It may be that the app simply isn’t finding the Mandarin voices correctly, in which case we’ll have to figure out a fix for the next update. That it changed recently, @kadrian, and given no recent mobile app updates like @LuciusVorenusX mentioned, I suspect something might’ve changed on your device, or perhaps some kind of update with Android.

@LuciusVorenusX it sounds like your device might not have a Mandarin voice available which is why there was no listening option for the custom collection, whereas it does for Italian.

My first thought was "but, but, as I said it doesn’t work on Web either!

Then I realised one critical error in my thought process; I only tested it on my default browser, which is Firefox. When I tried it on CHROME, on the other hand, the listening option WAS available and working in Mandarin.

(By the way, not that this is a problem, but when you delete a language the system fibs to you. I deleted Mandarin, acknowledged the dialogs saying that everything will be lost forever, then went into the language again to do further tests a few hours later… and found my custom collections from the earlier tests still there. Not that I ever plan to do that regularly of course, but it’s nice to know that all may not be really lost if it’s done unintentionally. Maybe.)

@mike I think you might have done something to make my custom collections play in Listening mode again, since they’re doing it today, but not with the voice I used to use. If so, thank you!

I don’t know how helpful this screenshot is, but if I press the Play button in the phone settings below, it plays the voice that used to work for my custom collections, which I think shows it is installed on my phone. When I made this post the other day, Clozemaster didn’t seem to be recognising it. 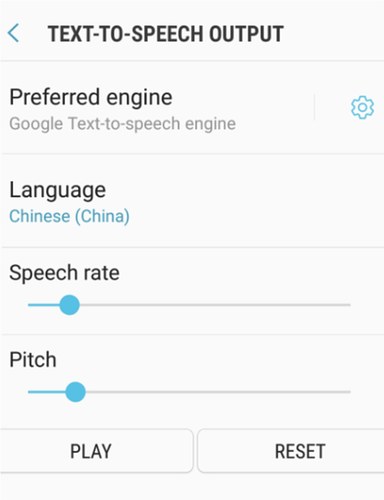 This is what I see now for CM voices available for my Mandarin Chinese custom collections: 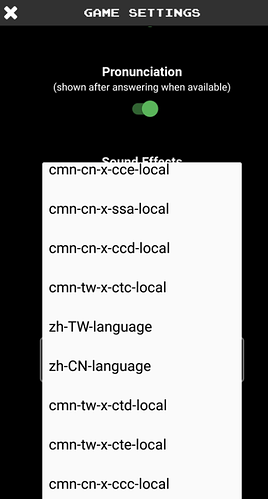 In any case, it’s working now!