Speaking mode always goes to digits rather than words for numbers

This is probably a niche issue since barely anyone seems to use speaking mode. (It seems to work only in web, only in Chrome, and only if you have permissions set just so, so there are rarely 10 people to fill out the leader board each week, at least in Italian.) However I’ll raise it because when it works, it works well.

If the cloze is a number, whether it be a standard integer like twenty, fifty, etc, or a time value like two thirty, speaking will ALWAYS (in my experience) record it as a number. “20”, not “twenty”. “2:30”, not “due e mezza”.

However when the question uses the spelt-out words (which they usually do)… the speaking input which is forced into digits will NEVER match. An example can be seen below:

Could this be fixed, please?

I’ve encountered this too, in the few sentences that contain numbers (dates, times, number of people, etc.). Hope this could somehow be remedied indeed.

Sadly I can’t use Speaking mode anymore myself these days, I always get a server error in Firefox, even with all permissions enabled (won’t go into why I can’t use Chrome anymore).

In a similar vein, it would be appreciated if THIS could be looked at as well. Apparently if a Cloze word rates beyond a certain level of profanity, (a level which is “chissà?”), instead of recording the word, you get FirstLetterAsteriskAsteriskAsterisk.

Yes, the cloze is filled in in the screenshot, but only because I had to TYPE it in which is NOT what I’m doing speaking exercises for. If the word is one Which Must Not Be Spoken then it would be much better to have it excluded from the exercises. I assure you, ones like this would not be missed. I get all the practical profanity I need from episodes of Commissario Montalbano, whereas questions like THIS ONE are just puerile high school stuff that prompts the “asterisk censor” to throw me off my rhythm. 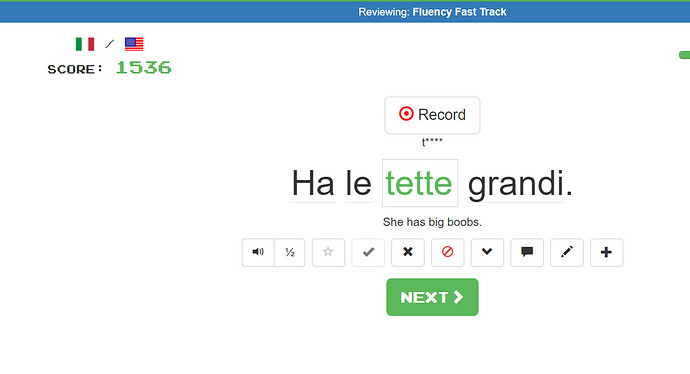 Also while on the subject, not that anyone at Clozemaster seems to be taking even the slightest bit of notice of this, speaking does not work if the cloze word can be expressed as a symbol, such as we see here for the word Euro, which is always rendered as the Euro symbol when spoken, and therefore never fills the text box: 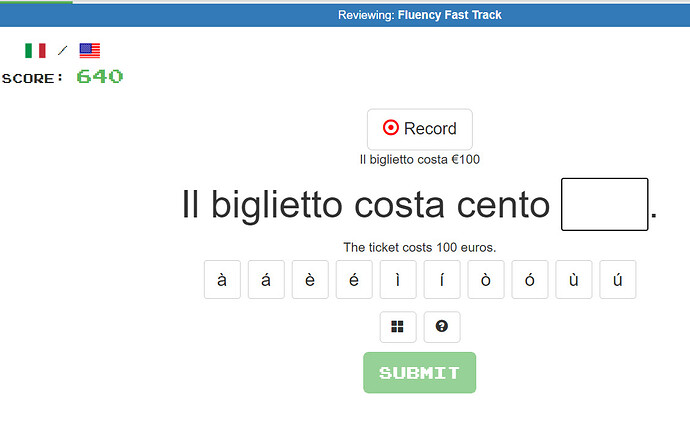 So glad you raised “speaking”. I’d love to use it but having tried every means to get it going, it just doesn’t work. I pop to Busuu for some speaking (the Italians there are great) but I’d much rather keep all my eggs in one Cloze basket.

Have a pleasant weekend!

I really miss it too, have you ever tried it in Chrome? That was the only way I’d got it to work in the end, though I normally don’t use Chrome. Sadly now even Chrome isn’t available to me anymore, and I can’t get Speaking to work at all anymore. For a while in Firefox I got it to clearly detect the duration of spoken input, it was just not “transcribing” it, but now it just gives an error as soon as I press “Record”.

I really hope it might become more widely usable soon for all, I believe it’s really one of the best Reviewing options for advancing one’s speaking abilities in general. Besides just the idea that speaking out the whole sentence will help better establish sentence formulation connections, I like that it can be used in a reviewing way as others here seem to use the “Multiple Choice” option (thinking of the Cloze in “Text Input” first and then swtiching to Multiple Choice to check). In fact, sometimes if there’s multiple options possible (due to synonyms, difference in gender, number, formal/informal you, tenses, etc.), I will generally read out the whole phrase as “Start of the sentence [cloze option 1] [cloze option 2] […] end of the sentence”, which for me is a great way to try to come up with all of the potential options.

I so liked that you picked this text;-D I hope to use the one about Tom’s length as the next example :-)))

Ciao @Sindaco. Sì sì, I’m a chrome or Firefox persona but still no go. It’s not the end of the world tho, as for me Cloze keeps getting better and better, and offers so much else. Once my Reviews are done I love “Listening” to the authentic voices and have become quite attached to one or two;-)

Improving speaking support and trying to handle these issues is on our to-do list. Please let us know of course if you run into any other issues aside from numbers, symbols, and profanity. It may be that we should create a separate collection just meant for speaking practice. It could be cool too to have a collection meant for speaking practice that’s exclusively travel related phrases.

We’re working to get speaking support added in the mobile app which should hopefully provide better / more consistent support. We’d like to get it supported cross browser as well of course, it might just take a bit longer.

We’re working to get speaking support added in the mobile app which should hopefully provide better / more consistent support. We’d like to get it supported cross browser as well of course, it might just take a bit longer.

This is all super great news, even if other browsers might take a while, much appreciated as ever!

While a dedicated travel-related speaking collection might be a fun option indeed, I personally would hope the general speaking option would still remain as widely available as it currently is (just minding the issues raised by @LuciusVorenusX).

(I know I’m quite late in replying to this; I haven’t looked at Discussions for a while.)

Besides just the idea that speaking out the whole sentence will help better establish sentence formulation connections,

Funny you should say that. My top tip when using Speaking mode is to read out the whole sentence rather than try to read just the word, because its accuracy with a single word is not great. (And no, that’s not a criticism; having dabbled in this field I’m aware of the massive challenges of getting speech recognition working at all given different languages, accents, pronunciation, etc. A bit of context for the recognition engine helps.)

That said… it didn’t take me long to realise that needing to say the complete sentence was helping me advance in ways that other modes weren’t to the same extent. I’ve been doing more and more speech work over the last few of weeks. I’m not leaving listening behind (or vocabulary) but I want to focus more on speech. My short term objective is an average of 200 sentences per day minimum, because notwithstanding the niggles I’ve outlined above (and thanks for signalling that they’re on your radar, @mike), I’m finding that as a learning method it’s Just. That. Good. I’m a little shy of it at the moment; I’ve averaged 130 per day this week, but the day ain’t over yet. One person on the overall leaderboard has done 3,000 sentences this week (I’m not sure in which language; they’re doing several), which is seriously impressive. I can’t see myself going that far, but I can understand the appeal.

Indeed it has re-kindled my German. I was getting nowhere in terms of absorbing that until I started doing Speaking and suddenly… hey, I’m getting this. French less so; I just seem to have no affinity at all for that language.

I like that it can be used in a reviewing way as others here seem to use the “Multiple Choice” option (thinking of the Cloze in “Text Input” first and then swtiching to Multiple Choice to check). In fact, sometimes if there’s multiple options possible (due to synonyms, difference in gender, number, formal/informal you, tenses, etc.), I will generally read out the whole phrase as “Start of the sentence [cloze option 1] [cloze option 2] […] end of the sentence”, which for me is a great way to try to come up with all of the potential options.

Oh yes, that used to drive me nuts when there was no context to indicate the right answer, but then I started doing what you do and reciting every matching word that I can think of. If I hit the right one then the engine will punch it in and away we go. In some cases though CM will use an obscure or less common synonym and I’ll hit Ctrl+Spacebar to get the audio.

I just wanted to add a little titbit here for anyone else doing their own collections.

In German I’m currently creating basic collections. Last night I created a bunch for numbers, sizes and so on.

I did the first one, the cloze for which was a number, and… you can guess the rest. I had forgotten about this thread. My initial thought was “that was a waste of time.” Then I had a second thought.

I put the numeric form of the number in as an alternative answer. Lo and behold…

You can see below the record button that the voice recording still logged it as a digit. HOWEVER this time it filled the cloze with the word for the number. This won’t help with built in collections (though you can edit them after the first attempt), but will certainly work when creating custom ones.

It also resolves the problem with (for example) currency signs. I added the $ or € symbol as the case may be as alternative answers and bingo, although the recording was the symbol, the word went into the Cloze. 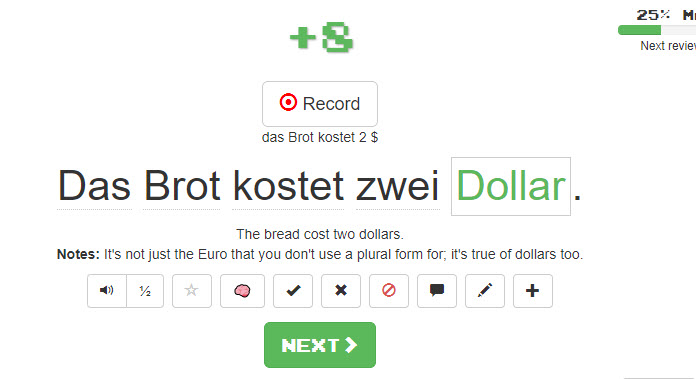 This may be of less importance to others, but for me it matters because while I’m still doing a mix of question types in Italian, with very rare exceptions I’m doing 100% spoken answers in German. It’s a quick and easy work around for my custom collections when dealing with numbers.