Request: ability to modify a sentence that I've added myself

I often add sentence/translation pairs that I find online to my custom private collections. Later, as I’m playing the pair, I can change the translation, but not the sentence. That means that any typos or suboptimal clozes need to be fixed before I add the sentence to the collection. But frequently enough, I only notice the problems when I’m actually playing.

I can understand why Clozemaster would want to prevent players from modifying a sentence that is in one of its noncustom collections, since this would affect other players. I’m okay with simply being able to report problems and asking for them to be fixed. But there’s no one to ask to modify a sentence that I myself have added to a custom private collection, and there’s no one else who could be harmed if I did modify it.

Thus, I hope that in the not-too-distant future, Clozemaster will give us the ability to modify a sentence from a custom private collection.

In fact, I believe you can modify sentences in your own collections while reviewing, it’s just that you can’t do it in “Review All” mode, though you can do it if you’re reviewing an individual collection. This is an inconsistency that I’ve reported a couple of times, to no avail.

Interesting. Maybe if I come across a sentence that I want to change, I’ll artificially set it up for immediate review, and then modify it via review of an individual collection. But I guess I would want to know which collection it belongs to. I hope I don’t have to work through all collections sequentially in order to fix problems. I much prefer the “review all” workflow.

If it’s easy for you to do, could you please post a link to at least one of your earlier complaints? I tried searching through your posts for them, but couldn’t find them. Did you get a response from @mike ?

UPDATE: The fact that you can’t edit a sentence from the manage/search dialog, either, exacerbates (or at least doesn’t mitigate) the situation. Here’s the dialog: 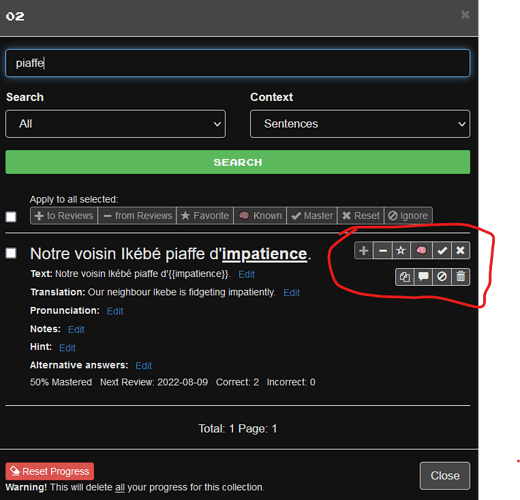 Notice that the circled group of buttons does not include “edit”.

I did find that I could:

But naturally it would be nice not to have to go through all these extra steps.

Maybe I didn’t post anything exactly matching your request, but I found this, which is essentially a request to remove all artificial restrictions from Review All.

Request for improvements to Review All Questions, Suggestions, Feedback

The Review All facility is a good feature but it could be made even better with a couple of changes: It would be very helpful to see which collection the current sentence belongs to. I happen to have quite a few collections concentrating on different types of topics, and it would be good to know what I’m practicing on at the moment. The pop-over is missing the very useful “Search Collection Sentences” option, as can be seen in these two screenshots: Reviewing an individual collection: …

By the way, there is a clumsy workaround: if you continue to the next sentence in the queue, you can view the sentences you have played in the current session, and modify your sentence there. Beware though, that feature isn’t reliable if you have made other searches during the session.

Thanks for raising/re-raising the edit sentence issues with Review All. I don’t have a specific timeline for getting to these at the moment, but they are now more top of mind.

Notice that the circled group of buttons does not include “edit”.

If you look to the left there’s Text: with an Edit link to edit the text. 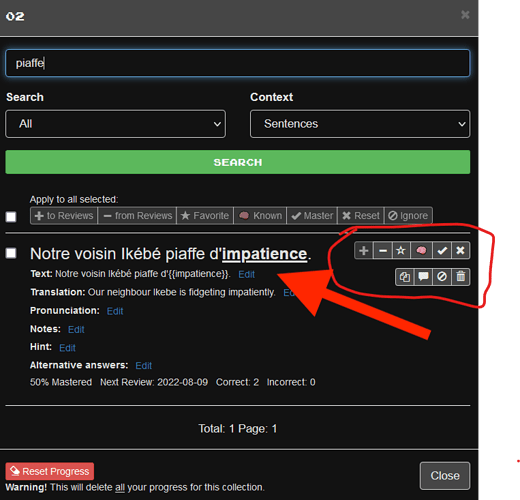 Certainly an intuitive UI failure on our part - thanks for letting us know that isn’t clear.

I’m not quite sure what isn’t clear about this, I’ve always found it intuitive (well, at least I don’t remember a time when I didn’t find it intuitive).

I’ve used the edit text option hundreds/thousands of times for my collections. Mostly that was just to change the cloze word/phrase (i.e. move the double curly braces), but it worked nonetheless.

It might be the case that the plain text and dark blue of the word “Edit” means that some people miss these options (particularly when talking about dark mode, as we are here). You could change all instances to being written in capital letters, bold, and flashing bright green and bright red

but that would probably hurt my aging eyes

. I would say that my eyes are more naturally drawn to the set of buttons that the text (and therefore dark blue “Edit” options), so there may be something better that could be offered.

Whilst the multiple “Edit” options could be replaced with just a big coloured “Edit Sentence” button leading to the full edit sentence dialogue, I very much like the current setup as the current interface is much quicker i.e. I just need to click “Edit” on an option and then I can edit that option directly in this interface, as opposed to having to wait for the full edit sentence dialogue to open up.

The only edits that this interface hasn’t allowed me to make are fine-grained changes to the %mastered number (i.e. I can reset a sentence or set it to 100% mastered using the buttons, but I can’t set a sentence to say 25% mastered using this dialogue). This isn’t a big problem for me, but I mention it because it is a noticeable omission from the items that can be changed from the edit sentence dialogue when actually playing sentences.

P.S. I should note that I have found occasions where the edit options didn’t work properly - the particular bug is one where I would make an edit using this manage collection interface (for example I might edit my hints) and my edits would appear to have been accepted. Later, when I then either went to play the sentence or else reopened the manage collection dialogue, I have sometimes found that my edits were no longer there. I’ve found that this isn’t restricted to this interface however, the edit sentence dialogue when playing has the same problem. Next time I see this behaviour I’ll submit a bug report.

Aha! There are three reasons I didn’t notice the “Edit” links before:

(1) Dark blue on black is indeed hard to see, especially in a small font and when not printed in bold.
(2) I’m used to the term “Sentence” being used instead of “Text” to refer to the target sentence (the one that contains the cloze). For instance, this is the term used in the “Context” drop-down list for searching (choices: “Sentences”, “Translations”, “Clozes”). One could argue that “Text” is more appropriate because not all the “sentences” are actually single sentences (sometimes they’re series of sentences, and sometimes they’re well-formed sentence fragments), but I’m fine with the term “sentences” as long as it’s used consistently. (As you know, “sentences” is used on the Tatoeba side to refer to these things that are not always single, full sentences.)
(3) The buttons are big and bright, and grouped in a cluster, so they drew my attention. I guess I assumed that everything I needed was in that cluster, but now I see that I was mistaken.