On leaderboard, level displayed should be that for relevant language 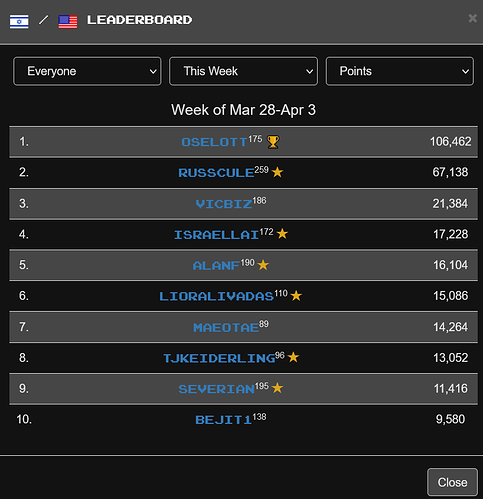 This is the leaderboard for Hebrew from English, but the level shown next to my name is 190 (my level in Russian from English) rather than 66. It would make more sense if 66 were shown here.

I believe the level being displayed is someone’s overall “global” Clozemaster level, rather than the level for someone’s best language.

In your case I suspect that if you were to look at your overall profile, then you would see that you have a level of 190.

For example, I show on these leaderboards with a level of 196, which is my overall Clozemaster score. My highest score in any individual language is 152.

Although I don’t check these leaderboards very often nowadays, I too would prefer it if the level displayed were the level that I (and other people) have for that particular language. I agree that this makes more sense.

There’s plenty of room on the screen to show both.