No points reduction for using hint

I find that although it looks like the points earned on a Cloze are halved when the initial-letter hint is used, the reduction is actually not applied when the score is added to the total.

I found this out by accident today, when I knew I was 13 points from levelling up, only got an 8 using the hint, and levelled up anyway.

I have since verified the behavior in two different language pairings.

I should add that I entered the answer using multiple choice. That is my preferred way of input, after I have decided what the answer must be.

Interesting, perhaps it is applied in one place and not the other? As in, could this be where the discrepancy between points shown on the leaderboard under “Leaderboard → All time” and elsewhere might come from?

I have a discrepancy of 1308 points, with the Leaderboard showing the higher total. This is only for Italian from English, where I have sometimes used a hint, but also occasionally accidentally triggered hint or multiple choice just through the shortcut key combination.

In Greek from English, the totals are the same anywhere, and I’ve never used hints, and only ever used Multiple choice, but admittedly that’s a very small set of sentences, played a very small amount of times, and I’ve also not “ignored” any sentences there, so it could also be due to that of course.

As such it might be that it uses the one total points for levelling up (disregarding points “lost” for hint used/switching to multiple choice), and the other for displaying on the dashboard etc.? It would be interesting to see if the dashboard would show you as levelled up at the time too. I’m miles away from levelling up, and tend to have endless review and playing rounds, but will see if I can remember to try to on purpose recreate this for further investigation (checking the dashboard total points required to level up etc. after having used a hint which should technically have prevented levelling up).

I have since verified the behavior in two different language pairings.

Ah this is of course the easier way to verify, than to wait for 18,886 more points, and then probably forget/mess it up by then

Plus it should give a more conclusive answer as to whether it comes from this raised bug, rather than ignored sentences

Going to have a bit of a play around too to reproduce, let’s see.

I should add that I entered the answer using multiple choice. That is my preferred way of input, after I have decided what the answer must be.

Ok, so I don’t know if it’s language-pairing dependent, or the fact that I used text input, but on Italian from Dutch with text input and “speaking” as review option, applying hint did successfully reduce the points.

I was supposed to get 16 points for reviewing a word at 25% mastered, brining it to 50% mastered, which would have levelled me up, but I used hint and got 8 points, and didn’t level up.

Let’s try with multiple choice now, and perhaps not using “Speaking” mode for the reviews. Which mode do you normally select for review @morbrorper? I guess the normal non-Listening/non-Speaking one?

I then use the hint, press the button to see the four alternatives, and select the right one. I can see that I get the correct score (halved), but if I go back to the dashboard I can see that the total score has increased by twice as much.

Yes, I was able to reproduce indeed, dashboard shows 8 points awarded (from 9 to 1 points remaining), but review screen shows it should have been 4 because of hint used & multiple choice used: 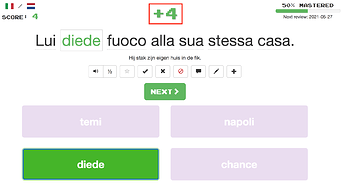 Only just realised myself too before reading your post that I can just go back to dashboard to check the score immediately.

Wonder if the bug is just due to the fact that it hasn’t been set up to halve twice (so half for the hint and then half again for switching to multiple choice). Will compare just hint and just multiple choice to see if that could be it.

Wonder if the bug is just due to the fact that it hasn’t been set up to halve twice (so half for the hint and then half again for switching to multiple choice).

Confirmed: the bug only occurs when using hint + multiple choice at the same time inside a “Vocabulary - Text input” round, both when “Reviewing” and when just normally “Playing” new sentences.

When using hint or multiple choice individually, points get assigned correctly, but when using both together, the points assigned correspond are double what they should be.

Incidentally, points discrepancy between profile/dashboard/leaderboard don’t seem to occur as a result of this, so that must be down to ignored sentences after all it seems.