Mistake in the Chinese course

The sentence is: 你为什么都不说话?
How come you didn’t say anything?

But it should be:
你们为什么都不说话?
How come you didn’t say anything?

Generally, if you haven’t already done it yet, the best thing to do when you spot a mistake, while playing or reviewing the sentences in your language pairing, is to use the “report” flag to pass this on to the Clozemaster team, so it can be corrected.

In the lower right corner of the playing/reviewing interface you should see a little red flag:

Clicking on this should bring up a the “report error” pop-up, where you can provide specifics about something wrong with the sentence, translation, or something else:

Furthermore, by clicking on the little speech bubble icon from the playing interface:

You can automatically start a Sentence Discussion here on the forums, which will be directly linked to the sentence itself, so other players can come across it directly from the playing/reviewing interface too: 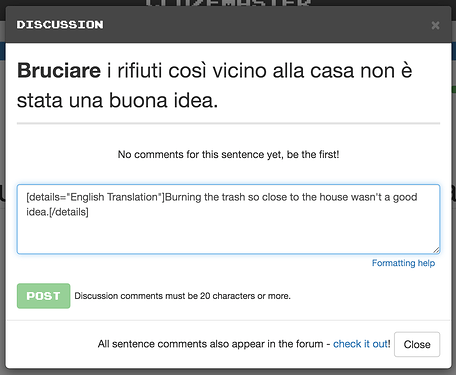 The Bug Reports section is generally for passing on software errors, where for example clicking on something doesn’t behave as expected when using a certain device/browser/…

Finally, as is also shown in the Report error pop-up dialogue (“This sentence is originally from Tatoeba. Please click here to update it there”), as well as in the original playing interface (the “Sentence source” button below the little red flag icon), you can go to the original Tatoeba sentence and suggest a correction there.

I found the following two sentences on Tatoeba:
你為什麼都不說話?
你怎麼什麼話也沒說？
as translations of
How come you didn’t say anything?
but they seem slightly different to your sentences. I have no knowledge whatsoever though of the language, so it’s probably easier for you to search for the relevant sentences yourself, or use the shortcut from the playing/reporting interface to access the sentence directly.