Go button should be default action

This concerns the dialogs that are displayed before one can start reviewing or playing new sentences: it should be possible to go forward just by pressing Enter, but since the Go button does not have keyboard focus, one has to hit it using the pointer. From an ergonomic point of view, this is not very user friendly. 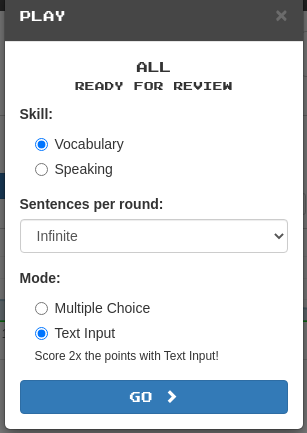 It… sort of does, but it’s not what you would call intuitive. It doesn’t appear as if any of the controls have the focus at the time that the dialog is rendered. If you hit [Tab] once, the focus will go to the dialog close (the [x]) at the top right. If you hit [Tab] a second time, it will focus on the Go button, though there’s no clear visual indicator that it has done so. (However you know it has, because [Enter] will then commit the “Go” command.)

If instead you hit the [Tab] a further time you’ll end up in the Sentences Per Round drop-down, and then move through the radio button groups before returning to the close dialog and so on around the path again.

I imagine that the reason that it was done that way was to ensure that people had set all of the values to what they want before proceeding, though I’ll agree that a shortcut key that goes directly to Go, does not pass the close box and does not collect $200 would be a nice addition to have.

Yeah, I figured out the workaround too, but it is a bit arcane

I find I personally change the options very seldom, so I would actually prefer not to see the dialog at all on a day-by-day basis. It gets tiring if one has a lot of language pairings to review every day.