Feature request: To be able to individually select the choice of Clozemaster voices.

I know that some people (particularly the Italian learners with Carla and Giorgio) like having multiple Clozemaster voices which are then randomly applied on a sentence-by-sentence basis, however I would like to be able to choose whether to have both voices in that fashion or else only have one of those voices, and in that case I’d like to be able to select which of the voices to use.

Here is an example of where I would use this feature: -
In Spanish the default users are a male from Latin America, and a female from Spain. I would rather not have the two quite different accents when I’m learning, and I suspect that other people might have a similar opinion. In my case I would prefer to only have the Lady in Spain (which just happens to be the title of an Ingrid Michaelson song that I like

), whereas others might prefer to learn using just the Latin American accent.

This feature would also have the added benefit, that when someone posts a comment to the forum about a mis-pronunciation from one of the voices, it would be much easier for other interested people to just select that voice and join in the discussion. At the moment, I find it quite random as to whether I get the same voice as the original poster, and it’s a bit tedious to try to keep re-selecting the same sentence hoping that the right voice comes up (e.g. it’s reported that Giorgio said something wrong, but I keep getting Carla).

I know this isn’t exactly what you’re asking for (you’re asking to select between the different available Clozemaster voices), but depending on whether you’re mostly using web or app, and on the availabilit of your TTS system voices, you might already be able to select just one specific voice from one specific country yourself.

If you’re in a playing/reviewing round, when you go to the “Settings”:

If you scroll down a bit, and you switch off “Use Clozemaster voice”:

You can select from the available voices there.

On my mobile phone for instance, I already have 4 System TTS voices for Italian, 2 female, and 2 male, and you can also adjust the pitch and speed to your liking. You can easily find them by just searching for “TTS” in your System Settings. 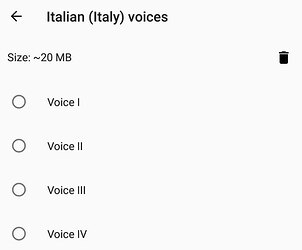 Furthermore for example Portuguese, French, Spanish etc. they do distinguish between regions. 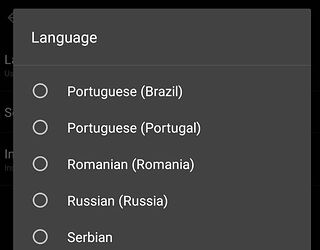 And in the app you can easily select any one of these:

I know on some computers you can also easily add different system voices.

As I said, I know this isn’t what you’re asking for, but it might help a bit in the interim.

Thanks very much for going to the trouble of putting all that together @sindaco !

For Spanish, I do sometimes use Elvira (Microsoft Natural voice from Spain), which is very good. However, I like the idea of having the same voice on any platform I use, notwithstanding the fact that recently I’ve been almost exclusively using my Windows PC.

For the record, I find the Microsoft Natural voices to be excellent ​(I recall mentioning something in a previous discussion about Elsa for Italian), and I also find that they are often much better at developing appropriate rhythm and pauses with longer sentences where punctuation is limited. It’s possible that the Clozemaster voices (which I believe are from Amazon) would be better at this now as well, as they were probably recorded a few years ago when the collections were first created.

In summary, your suggestion is an excellent one … however I would still like the feature request to be implemented

Thanks for the feature request! This is on our to-do list and I’d definitely like to get it implemented, but it will likely still take a bit more time as other projects keep jumping ahead.

It’s possible that the Clozemaster voices (which I believe are from Amazon) would be better at this now as well, as they were probably recorded a few years ago when the collections were first created.

This is true too. We’re also making progress on supporting voices from other services. Exciting times for text-to-speech!

At the moment our focus is on getting TTS added for languages that don’t yet have it even though it’s possible. From there we can start working on supporting multiple voices (at the moment some sentences for some languages have multiple voices, which is why you’ll sometimes get Giorgio or Carla, but it’s inconsistent). The challenge is mostly in trying to ensure every sentence has all the supported voices, and then updating the UIs to be able to use the preferred voices, but nothing we shouldn’t be able to build