It’s so nice to have transcription mode on the iOS app, so thank for adding that! At this time, though, the counter doesn’t increment by 1 as expected for each cloze you complete. It’s not very consistent either. After I noticed this, I did a couple rounds of 5 and one time, 5 sentences counted as 8 and another as 12. This amount gets added to the daily total, so it’s not round-specific.

@thefirmament
I’m also excited to have the transcribe mode on my iPhone app!

I practiced several rounds but my sentence counter works as properly as the other modes. I set 10 sentences and 5 sentences per round, but no difference between them. I used the transcribe mode only for reviews. Did you mix new sentences with reviews in the same round?

Do you mean the points you earn per sentence are sometimes 8 and 12? If so, it’s not about the transcribe mode. A sentence in 0% mastered gives 8pt for a text input if your answer is correct; 25% = 12pt; and so on.
The daily goal is not the number of sentences you practiced but the total points you earned.

I was only reviewing sentences, and I don’t mean points but rather the count of sentences practiced. Today I did the 48 I had for review in one language in one go, and it counted as 117 sentences practiced. The points are correct, but in my dashboard, the count of 117 shows up, rather than 48, so it’s not a session-specific quirk, where the real count might be hiding and getting saved in the background. My iOS version is <15, but it’s just basic incrementing, so it doesn’t seem likely that that would be the problem. Hopefully not. It’s an odd place for a bug; it’s good that you’re not seeing it!

You had better give more information including screenshots to let the app developer investigate the issue quicker.

My iOS is 15.5 (the latest) and the Clozemaster iPhone App version is 2.8 in which the transcribe mode was released for the first time.

I played a 20-sentence round today. The sentence counter works properly. Here are four screenshots. 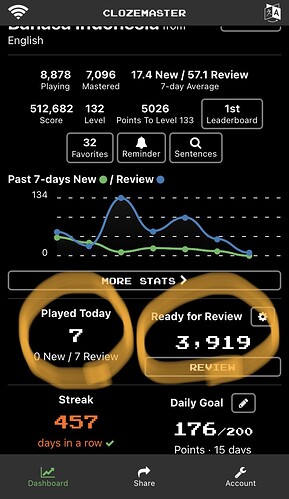 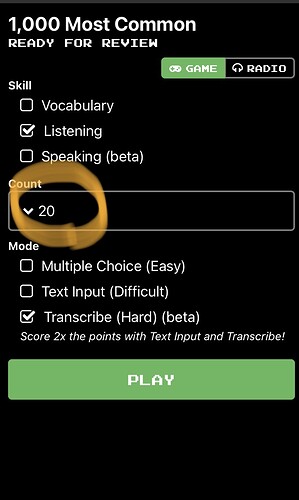 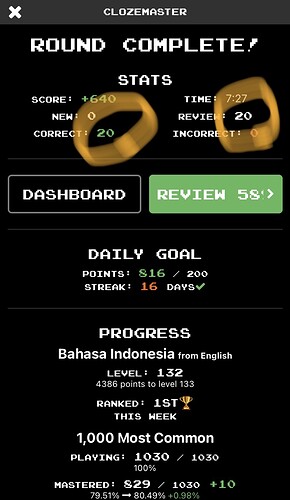 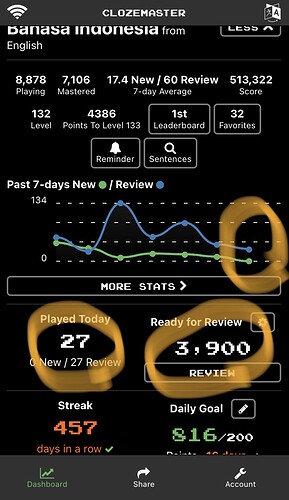 I would also recommend you to ask around other fellow learners on Reddit having the same trouble or not.

r/clozemaster: Language learning through mass exposure to vocabulary in context. Clozemaster answers the question "what will I do after after …

The CM official forums here are open only for PRO users, who usually prefer practicing on their laptops rather than mobile apps. They are so small that the app developer cannot get enough error cases to get a clue for potential bug fixing.