Having a Cloze Radio session active, with some other app in the foreground, clicking on the notification loads the app anew and I lose access to the Radio session, which keeps on running. Desired behavior: the click should take me to the active Radio screen.

I have also noticed Radio notifications lingering behind after closing the app.

I also think that the notification could show more of both the target sentence and the translation. 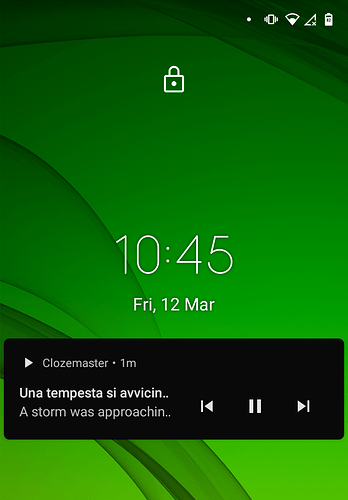 Is this the “Cloze Radio” feature, with the sentences and translations playing?

I’ve never had a chance to properly try it yet, because mine doesn’t work without internet access (it refuses to download the Italian TTS on my device for some odd reason, even though it offers the nice little download arrow for it), but I also had some sort of semi-bug thing the one time I tried it with internet access, where you can’t get rid of the little icon in the status bar, even if you’ve stopped the radio feature and are working on normal reviews etc., unless you close the Clozemaster app completely.

You’re right, it’s Cloze Radio. I will edit accordingly. Thanks!