Tip (and glitch): Automatically rewrap a new cloze-word by selecting it

Do you often change {{cloze-words}} when you add default sentences to your personal collections?

I had removed {{}} from an old cloze-word and then reinserted to wrap a new cloze-word. But I’ve just found that I can rewrap {{a new cloze-word}} simply by selecting it. Am I the only one who didn’t know??

Image #1: The default cloze-word is {{merdeka}} (the fourth word from the left). 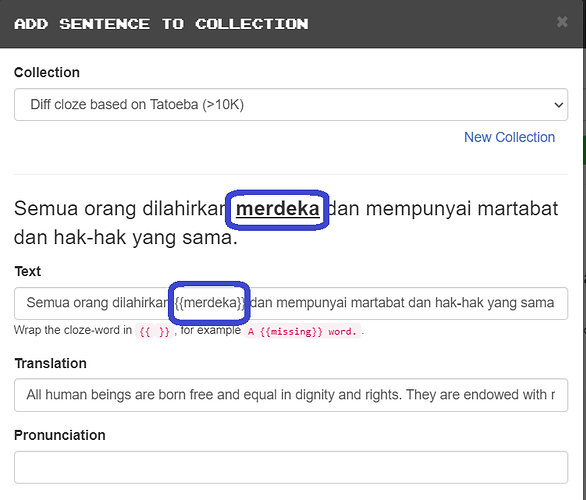 Image #2: Select the second word "orang", and the system automatically changes the cloze-word from {{merdeka}} to {{orang}}. 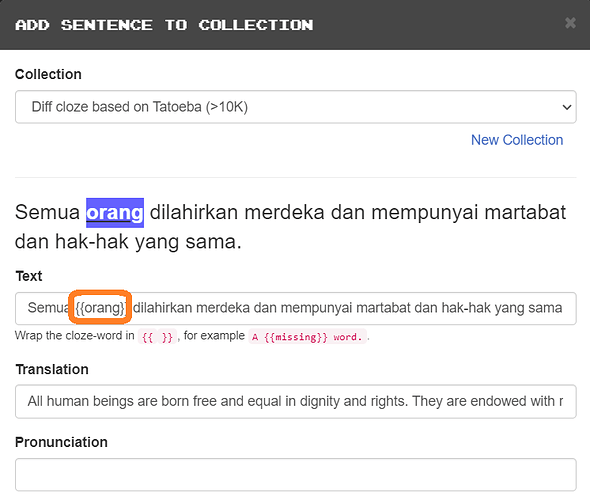 Image #3: If you double click any word, the system also automatically changes the cloze-word, but an unwanted space is inserted right next to the new cloze-word: {{Semua }} with a space instead of {{Semua}}. 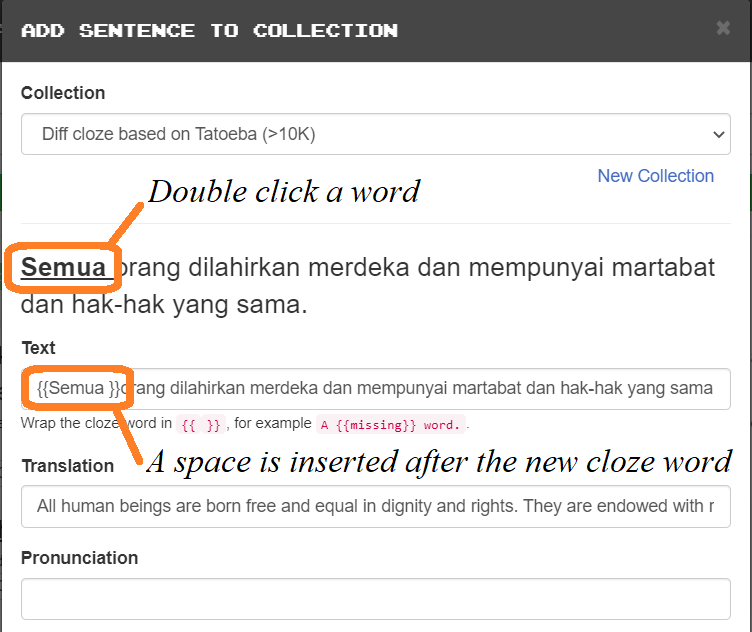 It would be nice if Clozemaster would fix the small glitch in the near future. But auto rewrapping definitely saves my time. I wish I could’ve known this tip when I started subscribing PRO.

This sounds like a wonderful feature, but it seems it’s not available on my mobile browser (Vivaldi on Android 10).

Update: maybe I misunderstood; I thought this referred to clicking in the addition dialog, which is a feature I’ve been missing but been to shy to propose.

I’ve used this a feature a lot.

I should start by saying that the glitch that you mention was reported last September in the bug report Spaces in clozes - Bug Reports - Clozemaster Forum.

@mike acknowledged the bug report, but I don’t know if this was pursued further.

When just changing the cloze word to another word I normally use double-click to change, but I don’t recall seeing the glitch that you mention. For reference, I use Microsoft Edge on Windows 10.

In terms of using this feature, I have been mainly learning by going through the Fluency Fast Track in various languages, and then adding sentences from the FFTs to private collections for extra practice. This is in some way related to how I get around the issues discussed in the recent thread related to spaced repetition intervals.

Sometimes I see multiple words in a sentence that I’m not familiar with, and so I add the same sentence more than once to my collection, with a different cloze word each time. This can also be achieved when playing a sentence (after you have answered) by clicking on each word that you want to be the cloze, and selecting “Add to Collection”, but I sometimes find it easier to just open the Edit Sentence dialogue using the method that you describe and edit the sentence (I like to use the keyboard wherever possible on my PC, so I can save a mouse movement by hitting the sequence “alt-A shift-TAB Enter” to get to the Edit Sentence dialogue).

N.B. In case people aren’t familiar with this, the same sentence can be added to a collection multiple times, as long as the cloze is different (if you try to add the same sentence with the same cloze it will tell you that the sentence/cloze pair is already in that collection).

I also use the highlighting feature quite a lot to add multi-word clozes (e.g. phrases or colloquialism) to collections, where the phrase or colloquialism has meaning as a whole, that the individual words don’t convey. Personally, I find this better than filling in one cloze word from a phrase, as it helps me to remember the whole set of words together as the meaningful unit in the language. For these types of clozes I often normally add a hint such as “[three words]” to indicate to myself that I’m looking for a multi-word cloze.