The automatic Google translation of individual words seems completely useless to me, even for a major language like Spanish. Just look at this screenshot: 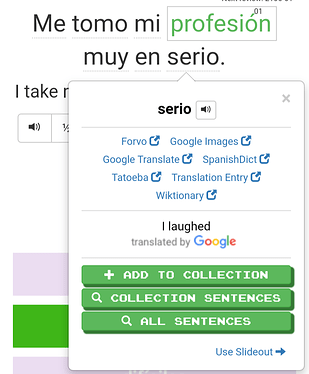 Google ridiculously translates the adjective serio as “I laughed”!

I can understand the flawed reasoning, as se rio means “he laughed”, but “I laughed” is me rie: talk about jumping to conclusions!

So I’m wondering: what’s the use for such an unreliable tool in the first place, other than for laughs?

Indeed, there seems to be an oddity with Google Translate’s handling of the word “serio”, especially in “preview mode” (the translation you get from Google when you select a single word in Clozemaster). I speculate that these might have to do with errors on the part of humans (namely the people who mark translations as verified) rather than, or in addition to, the artificial intelligence. But even so, Google Translate offers multiple ways to get an answer, especially in “non-preview mode”, and many of these answers seem decent.

When you pass the entire sentence “Me tomo mi profesión en serio” to Google Translate, you get “I take my profession seriously”, which is fine. Furthermore, when you double-click on “serio” within that sentence, you get “serious” and various synonyms. 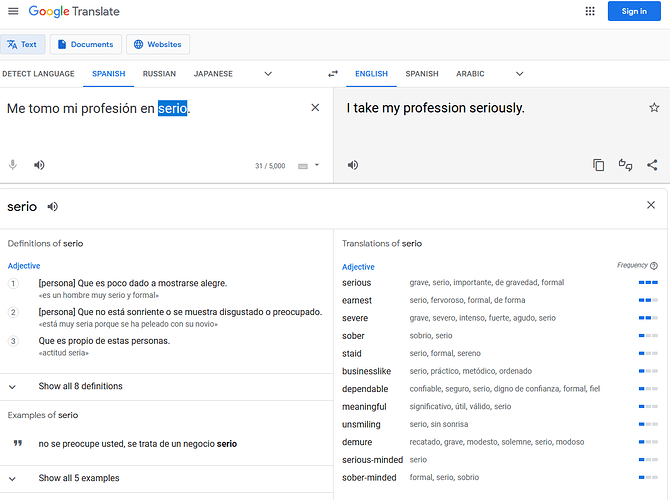 But if you pass “serio” as a standalone word into Google Translate, you get “I laughed”. There’s a “crowd” icon next to the translation, which means “reviewed by contributors”, and I wonder whether those reviewers messed up, either deliberately or accidentally. Not only does “serio” lack the space between the words and correspond to the wrong person (third instead of first), it lacks the accent mark present in “se rió”. In any case, you still can see “serious” and synonyms below the translation. So while you’re right about Google Translate not being a fully reliable tool, it does allow a user to narrow down the possible meanings. 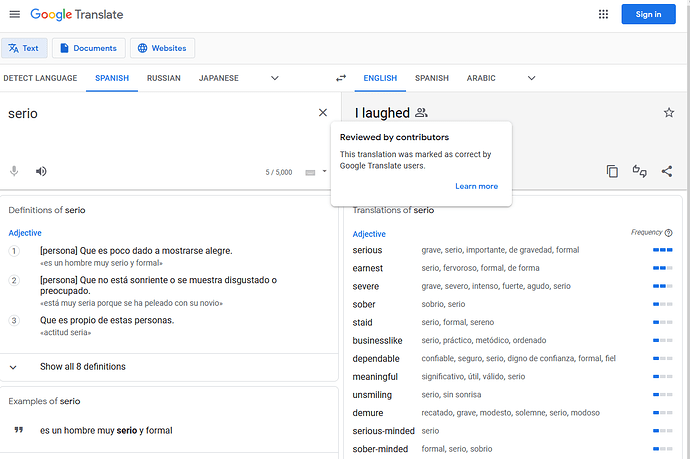 DeepL translates ‘serio’ as ‘serious’. GT (not sure what happened there lol). But as you say, GT offers various other definitions which are correct.

I like using Google Translate in rounds. I select the entire sentence and compare it to the Tatoeba translation. They differ sometimes but usually slight variations (meaning both are correct). Often, both translations are identical. (EDIT: Oh and GT is usually pretty reliable with phrases. I often select a phrase within the sentence as phrases can be tricky for me to decipher…I’m getting much better but still scratch my head at times)

Sometimes, I struggle with the CM translation as they can be difficult to comprehend for me. After I see the GT translation to compare the two, it usually becomes more clear for me. And, of course, GT butchers a lot of idioms (so does DeepL) - which is why human translations can be so valuable given the nuances each language presents.

So a quick followup… I do love the ability to see ‘what Google Translate has to say’ when I’m confused by the free translation given in the CM translation. The first couple months I only selected individual words until one day ‘by accident’ I selected more than one word and…GT popped up with its translation! (Which was actually a significant discovery for me.)

morbrorper (who is a great contributor in here answering questions for us and everything else) did say “Google translation of individual words” emphasis on ‘individual words’.

Well, today GT scored high marks for an individual word… “policía” I’m a big Cleveland sports fan and when a Cleveland team is playing, I’m watching. I devote my full concentration when on Clozemaster so when watching sports I study on my Tobo Spanish flashcard app. (I’ve learned a ton of words on that app). Anyway, during an El / La game… for the noun ‘policía’ I selected “la”. Tobo said wrong, it was “el”. I was certain I’ve see it on Clozemaster. Turns out I was right. CM sentence I saw today: “Deberías haber llamado a la policía” (You should have called the police.) 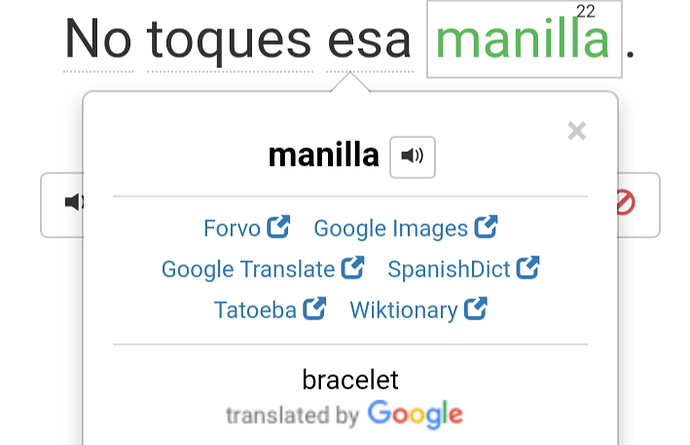 The “correct” answer is “door handle”; “bracelet” is pulsera or brazalete (according to SpanishDict).

At least it got the word class right

My VidaLingua dictionary gives this definition for manilla:

“bracelet” as a euphemism for “handcuff”, maybe?

I honestly don’t know; my knowledge of Spanish as it’s spoken all over the world isn’t extensive enough.

I explained when individually selecting “manilla” GT says bracelet. He said he’s never heard of that meaning before… I ‘think’ he said we would say “No toques esa pulsera.” (Don’t touch that bracelet)

One of the translations references a Colombian bank, and a few of the others relate to a Proyecto Salvavidas which is also from Colombia.

A quick web search for Colombian sites using the word manilla shows examples such as this one -
Manillas de identificación de paciente - Medicina General - Bioplast S.A.
so it does indeed look like manilla can be used in Colombia to mean “bracelet”.

N.B. That doesn’t change the point that @morbrorper is making about the “suggested” translations from Google translate sometimes being poor or non-standard. 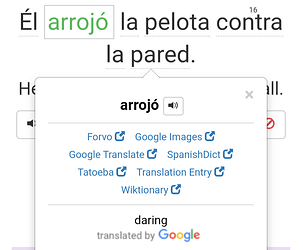 I wonder how GT came up with “daring” (I had expected “threw”). Is it because there are balls involved?

Found another questionable GT translation, this time for the entire sentence…

un negocio can mean “a business” but also “a deal”.

Context here is key! Obviously “deal” was the right definition in this case.

DeepL also said “I did a business” but listed alternatives:

The Tatoeba (CM) translation was the obvious choice here.