Request: Virtual keyboard for the web

I would really appreciate to see a phonetic keyboard for Russian, Greek, Georgian and other non-latin alphabets. That keyboard could work similarly to the Google one except that it would be automatic, like you type b and get б, alt+e for ё, whatever works best. The Greek one would have been trickier as all vowels would need their accented versions or diaresis but that could work on the alt+ combo as well.

Why is that? I do most of my learning at the computer, at a higher screen and typing, it helps with muscle memory. Since I have to switch to the phone in order to play Russian and Greek, I end up working much less on these languages. I believe others could find themselves in a similar situation.

While I agree that it would be nice to have this in Clozemaster, it is possible to set this up on your operating system yourself, and then you can use it in any applications. On my Windows machines, I have a Russian phonetic keyboard similar to the “Russian Phonetic MacOSX Layout” described on this page that I created and installed using the Microsoft Keyboard Layout Creator. On my Android devices, I have a similar Russian phonetic keyboard using the Multiling O Keyboard app. It’s almost unchanged from the default Russian phonetic keyboard that Multiling O Keyboard offers. Of course, not everyone is going to want to go through this process, but it does give you full control over which key is assigned to which letter.

Yeah I know but alternating keyboards in Windows remains cumbersome for me. Even for Latin-based scripts it’s way easier to use the Clozemaster shortcuts when playing it than the Alt+0??? combinations. Besides, I can only install keyboards on my desktop computer not on other computers I use. 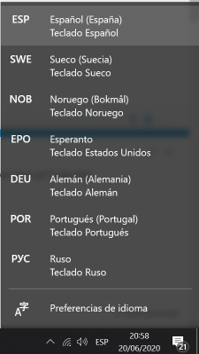 I can’t do this in any PC. Besides, switching between them can mess up with other tasks. For example, if I’m typing an important fact I might make a lot of typos and accidentally switch from English to Brazilian Portuguese. It adds to the task’s complexity.

I like to have Clozemaster work as a closed environment. It’s so much more practical. I had to type Norwegian elsewhere and I caught myself typing the Clozemaster shortcut instead of the usual Alt+0??? combo.

Thanks for the feedback! It might be doable to add a virtual keyboard option, though I’m not sure about phonetic. Would a non-phonetic / native Russian, Greek, etc. keyboard still be useful?

I’ve added this to our to-do list to revisit. We’re working on a number of other updates/improvements at the moment, so it may take some time. The options @adrianxu and @alanf outlined are probably best in the meantime.

If anyone else would find a virtual keyboard useful please let us know. Thanks again!

The issue about being phonetic is merely assigning the Russian/Greek characters to its latin counterparts instead of using the standard layout, having o for Russian o, b for Russian b etc… Then the remaining unassigned characters could be assigned to other letters. A standard, non-QWERTY layout would still be useful though.