Options that are too easy due to wrong part of speech

Often it is clear that the blank word needs to be a noun or a verb.

If two of the options are not fitting the part of speech then those can be very easily eliminated. That makes many questions too easy. I fill the blank based on these clues without even knowing the exact meaning of the verb itself.

I say this for Clozemaster German but it probably applies to other versions as well.

Is it possible to change this somehow? To make sure verb blanks only get verb options? Or something similar. Maybe this can be considered a feature request.

How does clozemaster choose options anyways?

How does clozemaster choose options anyways?

I’m assuming that you’re talking about multiple choice options. I never (almost never) use those myself, and @Mike would be the only one who could give you a definitive answer, but for pre-built collections I believe that the three incorrect answers are always randomly selected (from the whole of the German language).

When you create your own collections you do have the choice of setting Multiple Choice questions as having either “Random Words” or “Cloze Words”. “Random words” is self explanatory. A bit of experimentation with my custom German collections showed that “Cloze Words” means “Words which are clozes in other sentences in that collection”.

You could of course always create your own collections where every sentence has a verb or a noun as the cloze (as the case may be); it would be a lot of work, but probably also very useful at committing words to memory.

I agree that limiting clozes to the specific parts of speech would be useful, but I suspect it would be a pretty big chunk of work. But again, that would be something for @Mike to respond to. 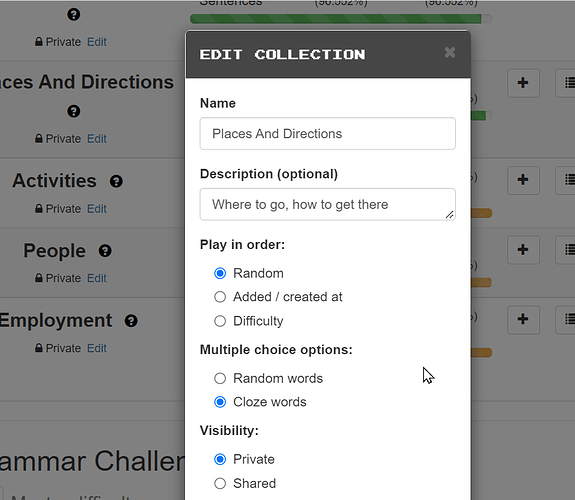 If you want to quickly create a set targeting verbs, just Google “top 100 verbs in X language”, then copy-paste that list into a custom Cloze Collection using the “paste in words” feature. Then set the collection to “cloze words” so that only the words from your list are multiple choice options.

Thanks. It’s not so much about targeting verbs or nouns but just making the questions a little harder.

Right now most questions i can answer by pure elimination.

If you want to make things a little harder, you could also try to switch to “Text input” instead of using the multiple choice option.

For Italian, with which I was already quite comfortable when arriving at Clozemaster, I have personally not used the multiple choice option intentionally, since discovering the text input option.

You can still make the text input mode easier, by enabling the text box width and colour hint options. Especially if you are using “Listening” mode, where you are basically just transcribing what you hear. Or by using speaking mode, in case you do know how to pronounce the word, but are not too comfortable yet with the spelling.

This is what I personally really love about Clozemaster, there are so many options you can adjust, to make things harder or easier for yourself, according to which level you’re currently at in your language learning journey.

I am also very grateful the multiple choice option exists in its current mode for languages I don’t have any knowledge of whatsoever yet, like Greek. There, even just using the “Listening” mode, I sometimes still can end up selecting the incorrect option from the multiple choices presented, and I’m years away from even knowing what any of the multiple choice words actually mean, so I’m nowhere near making any more informed choice, without just matching the sounds to the characters.

Since the grammar breakdown of sentences does exist for certain language pairings these days, an optional multiple choice “harder” mode could perhaps be envisioned though, where it can offer you different verb options for verb clozes, etc. Though I guess such a mode would also need to ensure alternative answers would need to be excluded or also accepted, so would still require a bit more work to be fully functional.