La neve or le neve? ( This sentence is already strange).

Perhaps it makes more sense if you live with a lot of snow or run a ski lodge. The yellow stuff could be very unpleasant;-)

There are several odd ones like this particularly on the English from Italian course, that make me think twice.

I don’t know the original source but that expression was made famous by a song released in 1974 by Frank Zappa titled “Don’t Eat the Yellow Snow.”

Famous but mostly incomprehensible, at least to me: 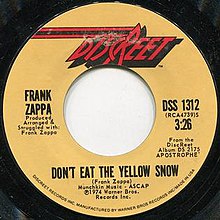 "Don't Eat the Yellow Snow" is a suite by the American musician Frank Zappa, made up of the first four tracks of his 1974 album Apostrophe ('): "Don't Eat the Yellow Snow", "Nanook Rubs It", "St. Alfonzo's Pancake Breakfast", and "Father O'Blivion". Each song in the suite is loosely connected, although the songs are not all connected by one overall story/theme. The suite was only played in full from 1973 to 1974 and 1978 to 1980. "Saint Alfonzo's Pancake Breakfast" contains Zappa's percussionist ...