Spanish, French, German, Italian, and Russian (all from English) have a new feature in beta on the web we’re calling Cloze-Listening

(not to be confused with playing the listening skill, which we’ve referred to as cloze-listening in the past

There are different accents, background noise, variable quality - in other words it’s an excellent challenge to improve your listening skills. If you can understand and master these sentences, you should have no problem in the real world.

We’re trying it out as a separate feature (separate from collections, points, leaderboards, etc.), and each language pairing has just 1,000 sentences for now, though we should be able to add significantly more. It also uses Easy/Normal/Hard controls for spaced-repetition.

Excited to get your feedback!

Anything else please let us know of course as well. Thanks for trying it out and thanks for any feedback!

Wow! Great challenge! Not there yet. I am trying to make all my collections finished . The >50,000 most common looks like another lifetime away. I will definitely use this feature from time to time because it is a real life Italian language. Training your ear to all the variations will become the part of this journey. Thank you for giving this choice!

I get this message when I try to play it in Firefox:

If I hit OK, I can see the first sentence but the sound doesn’t play, either automatically or when I hit the Play button. 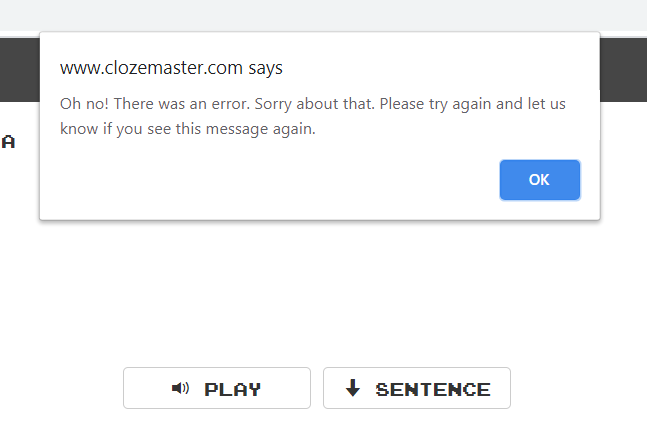 Same here. Can confirm that this is also happening on Microsoft Edge.

With regard to the feature itself, I like it, and thank you for it… though I would like it MORE if it also had the typing colour hint as we have in the standard game. I hate getting something wrong because of a typing and/or misppalling (sic) error.

My Windows and Firefox versions are the same as above and Chrome is 86.0.4240.198. Everything claims to be up to date.

I don’t understand the logic in giving no points or sentences played credit for this, but letting people play the same simple sentences in other collections day after day for 32 points.

@kadrian @punk French should now be fixed! Thanks for letting us know. There was an issue with the permissions for some of the audio files that should now be resolved. Any additional issues please be sure to let us know.

though I would like it MORE if it also had the typing colour hint as we have in the standard game.

Thanks for the input! That should be doable.

I don’t understand the logic in giving no points or sentences played credit for this, but letting people play the same simple sentences in other collections day after day for 32 points.

We’re not yet sure how this will fit into the bigger picture of Clozemaster, so didn’t want to go mixing it in with the existing points/stats, but we’re pretty excited about the native speaker audio and wanted to make it available as soon as possible.

I tried to bin this reply because I noticed that some other replies that slipped in ahead of mine covered the points that I raised. However when I hit the bin icon I get a 500 internal server error.

Just pretend that I didn’t say anything…

French still isn’t working for me with either Firefox or Chrome. Out of several attempts, I’ve managed to get one sentence to play a few times, but mostly it’s just showing the error message.

Thanks for letting us know! We’ve disabled this feature for French for now while we figure out what’s up

French is back! Also added for learning Welsh from English.

For French, it would be helpful to have the buttons with the accents.

It’s working fine. There are certainly some strange sentences, e.g. “This is what a spirit of precision would be.”

Ciao Kadrian. Brilliant! There are certainly some beauties in Italian that leave me open-mouthed - I still learn them tho, they sound beautiful in Italian, and you never know when they might be needed;-) Lol.

This has a lot of potential to be a valuable tool for listening to the target language spoken in all of its variations. From my limited testing of it in Spanish, there were two issues that stopped me from using it for a longer period (which I really wanted to do). One was the quality of the audio. I struggled to understand many sentences just because of the quality of the audio. I don’t want to hear professional recordings. That would defeat the purpose. However, many of them came close to being incomprehensible. The second issue was that I had too many sentences where the missing word was a name. This was frustrating because in a live conversation, you often ask the person how to spell their name if it is not particularly common. Those type of sentences felt like wasted practice. Aside from those two issues, I am very excited about this new feature and the enhancements to it that will most likely be coming soon.

Thanks for the feedback @dac573! This is super helpful.

Any other feedback please be sure to let us know. Thanks again!

I don’t understand the logic in giving no points or sentences played credit for this,

One option we’re leaning towards is having this feature be separate - no points, and with its own leaderboard(s) to track the “unique time played” stat and/or simply number of sentences completed. We could also alternatively add the % Mastered and points just like playing regular collections, but this feature seems more difficult than the regular collections, and it might be interesting to have a separate leaderboard (though we may be able to have that either way). Curious to hear if anyone has any thoughts/preferences.

image947×263 15.6 KB
Notice the translation has some characters that shouldn’t be there.

Is it possible to bring the virtual keyboard for special characters?

Personally I would prefer longer/customisable intervals. I realise that they will increase with time, but especially while the request below hasn’t been implemented, I keep getting confronted with 50+ reviews to plough through, before I can even listen to any new sentences, and that is after having selected “easy” twice. I’ve just started ignoring everything in the interim if I got it correct twice in a row and understand the whole sentence

which I’d prefer not to do, but it’s the only workable way I see at the moment, because I normally like to listen to 30-40 new sentences each day (I set out to listen to only 20 or so, but then occasionally just end up going with the flow of the infinite rounds).

Please as a minimal added feature would it be possible to just separate out the reviews from playing new sentences? One button for “play” and one button for “review”, would be so much appreciated. Then I could decide to review perhaps 10 and play 10, or whichever combination I feel like, rather than having to ignore sentences for fear of the day a couple weeks down the line where I’ll have to work my way through 200+ sentence reviews, before being able to listen to any new ones.

So anyway most of all just thank you for offering this amazing feature in the first place, and perhaps I’ll just need to work on curbing my enthusiasm for it