How (un)popular your target language is? -- Duolingo vs. Clozemaster

“Why does Clozemaster (or Duolingo) improve/expand the content for popular courses such as Spanish and French while my target language is left behind?”

I have seen this kind of rant many times on the Internet. I always suggested them to manage their expectation based on the popularity (i.e. profitability for app operators). However, they just keep ranting on and on.

In order to convince them, I calculated how some language courses are so unpopular on Clozemaster and Duolingo. 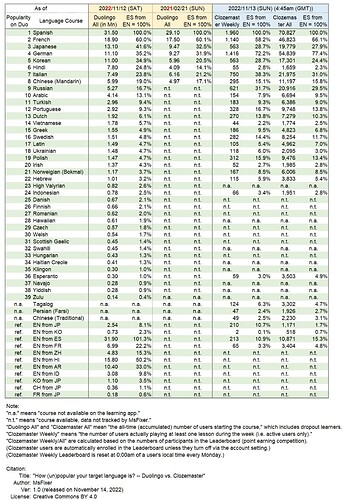 See Spanish and Russian on the list, for example. Russian on Duolingo ranks 9th with 16.7%. In other words, The Spanish course (the most popular) has a 6 times larger user base than the Russian course.

The only learners who are eligible to be demanding are Hindi. – Hindi has significantly gained new learners on Duolingo in the last 21 months, jumping up from 8th to 6th in popularity. However, Hindi on Clozemaster still has 2.8% against Spanish. Clozemaster should invest more time and effort in the Hindi course and its promotion to prospective users.

ETA: See the following two images if the full list in one page above is too small for you. 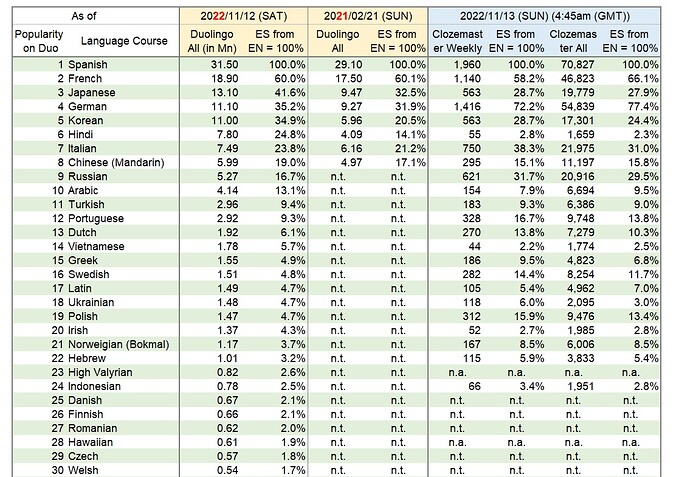 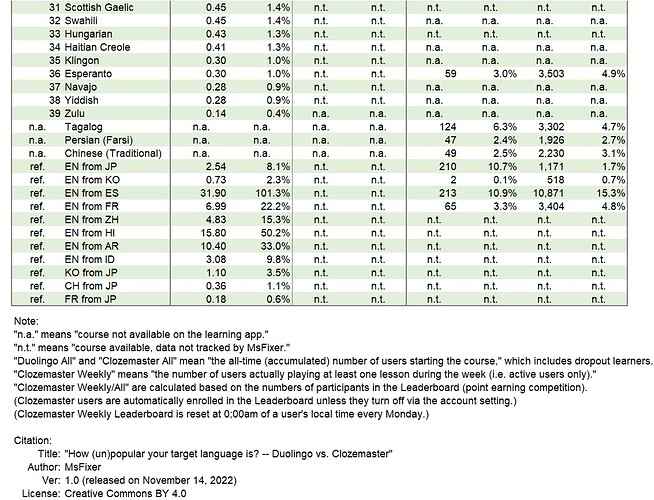 That’s a great investigation @MsFixer, you’re a star for putting that together.

I’d often thought about getting hold of that type of data from Clozemaster, but I didn’t want to have to join each course individually, then leave the course, and then delete the notifications that would be sent out about joining the course.

(… otherwise that would be quite the effort to get hold of the data).

Thanks in any case for posting this information!

@zzcguns
Good to hear that the stats is worth your while to read.
I wish I could have a better systematic approach, but I compiled each number manually by creating a subaccount to avoid sending notifications about my new courses to my followers. That’s why I gave up rank 25th and lower.

You can deduct some implications from the stats. For example,

That’s actually possible using your regular account, as you can manually delete notifications (from your Profile):

Of course, you will have to be reasonably quick about it, before any of your followers open their Activity Feed

Thank you @morbrorper for the instruction. However, I still need a subaccount to test my target languages. The approach is to play the minimum number in each course and check my ranking on the leaderboard. Without a sub, I have to delete the current progress for my target languages from my regular account.