Has anyone seen this bug: I'll call it "the sentence appears twice, but with no cloze"

I’d appreciate any users who could respond if they have seen a peculiar error in the foreign language text. Instead of the sentence appearing as it should with one word missing (an empty box indicating the cloze), the sentence appears twice with no words missing, and an empty box between those two sentences. It’s partly annoying because, to get a correct answer, the system is still looking for us to enter a cloze… but with no word missing, we can’t know which word isn’t supposed to be showing.

This has occurred for me literally hundreds of times on the Romanian board, which I report as an error (so that sentence gets skipped in future). But going over new material, I continue to see the same error in maybe 10 or 15 per cent of all sentences.

I have noticed that the error happens only when there is a word with a contraction, which in Romanian would show, for example, like " s-a". So now, in that example, I can type in “sa”, and get a correct answer… but of course i haven’t actually learned anything.

I have not seen this error in the French board or in Latin, but then again, I haven’t seen contractions in those languages. Perhaps this is why i don’t see many/any words with apostrophes in French?

I put the flag up over in the Romanian discussion board several months ago, but got no responses from other users on that rather quiet board. Plus I have continued sending in literally five hundred error reports as the messed up sentences keep appearing.

You would think there is a ‘software’ solution to this problem, rather than going one by one to fix the examples that have been flagged as incorrect. I got my first response from Clozemaster management about a month ago, but I don’t believe it has been fixed.

Thanks for the bug report! This issue is related to the hyphen issue you reported in the other thread (which is also why you weren’t seeing it for Latin or French like you mentioned) and should be fixed as well.

Please let me know of course if you’re still seeing the issue or any others.

on that rather quiet board

Occasionally it does - Clozemaster is still very small (just me and a few freelancers, all very part-time) and relatively new - though we definitely try to get to as much as we can as fast as we can.

Thanks for addressing the bug, and I do think it’s now fixed. Was my estimate of 500 error reports literal or figurative? Well, I will admit that I didn’t count them going along… but can you prove that there weren’t 500? 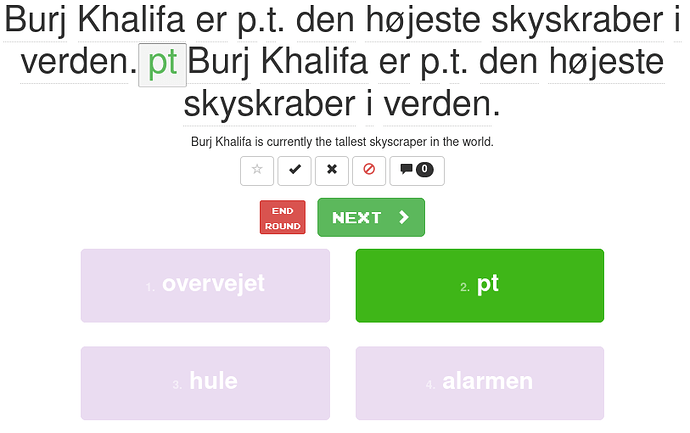 That’s the same pattern, yes. In Romanian, the error was triggered by the use of hyphens, which are used for contractions, like apostrophes are in English. In your case, it’s the p.t. It was a very common problem in Romanian, until it was finally fixed. Thanks

@mike Found five. I don’t see a way to report outside of gameplay.