I’ve recently started making my own custom cloze master collections. I want to be able to practice certain specific words and sentences that I come across on the Internet. I think it’s great that I can practice them in increasing intervals, and that they play voice as well, that is extremely helpful with memorization. I can also put single words in. I think this will be even more helpful than doing the fluency fast track, but I won’t start my own custom collection until I’ve amassed a lot of custom cards.

Anyways, one of my tools is Google Translate; i know, I know, it’s not perfect, but it has excellent features, including, being able to read the definition, and translate that, and especially, the phrasebook. Keep in mind than I am learning Italian from English so google translate will undoubtedly be more accurate for me than someone studying Arabic or Chinese. If google translate’s translation is wrong or ambiguous, check Reverso Context, 9 times out of 10, you’ll figure it out. The thing is, I have 5,938 saved phrases. Google lets me export it to an excel file, I think. I was trying to write an automation application that would put every phrase I’ve saved in google translate into a new cloze collection and save it for me. That would save me a ton of time; having to input every value in one by one. But I have to learn how to use node.js and an extension called puppeteer; then I could do it. I’ve never specifically used those before.

I am pretty busy with my 2nd last semester though, so I was wondering if someone who works on developing clozemaster could read my post and simply consider it. An option: “IMPORT PHRASEBOOK FROM GOOGLE TRANSLATE AS CLOZE COLLECTION”.

This would make it exponentially easier to create large cloze collections.

The only problem i can foresee would be there would be a risk of having cards with incorrect information if those decks were set to public. Hopefully people wouldn’t make their decks public until they’ve reviewed each card. Or perhaps decks shouldn’t be made public until they are reviewed by a native speaker. I am also not sure if there is any red tape around having your mobile app interact with Google’s. I can foresee issues if google changes the website layout of translate. Either way, I will probably write this automation code for myself, simply to save me hours of copying phrases to and from my custom collections.

Having those sentences in clozemaster will be WAY more useful for memorization than reviewing them in google translate in a big huge list.

What do you think ? I do have a lot of ideas.

After all, Clozemaster does light my inspiration.

With regards to this:

The thing is, I have 5,938 saved phrases. Google lets me export it to an excel file, I think. I was trying to write an automation application that would put every phrase I’ve saved in google translate into a new cloze collection and save it for me. That would save me a ton of time; having to input every value in one by one.

If Google lets you export to an Excel file, you could just open it in Excel and save as CSV for easy import into your custom cloze collection in one go. 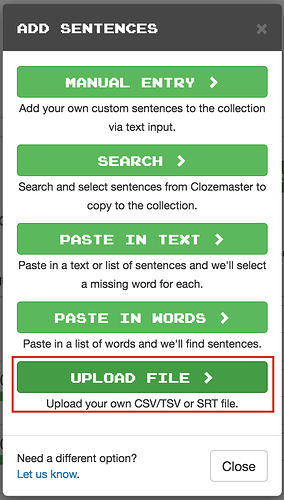 As per the info screen, just make sure the (Italian) source sentence is in the first column, and the translation in the second one, of your CSV file. 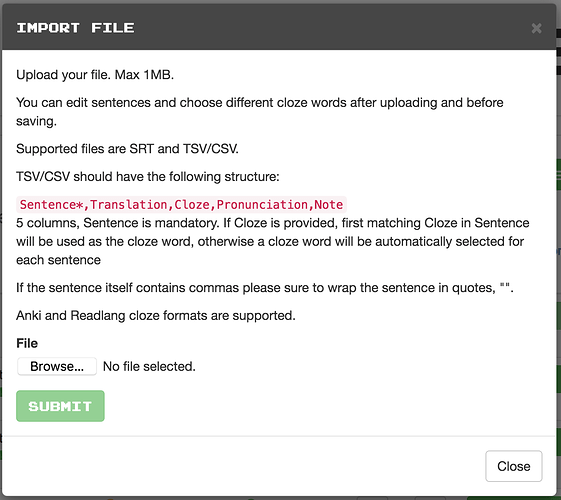 Hopefully that might make things slightly easier for the moment?

Interesting. Thanks, I’ll definitely give that a try. I’ll let you know how it goes and if I manage to upload everything into close master using the excel file.