The things you notice out of the corner of your eye. There I was working away on Web when something I hadn’t seen before popped up at the bottom left; a little white icon saying “Explanation Request”. At first I thought it may have had something to do with the note that I had on the sentence (though I didn’t see how since it’s a private collection), but no, it was popping up even on ones that don’t have a note. (And later tests showed that it also appears in standard collections like Fluency Fast Track.)

From the description I’m not sure whether these requests actually go to anyone or whether it’s exclusively a test to see how many people raise them, but I thought I’d bring it up because I think this could be an interesting feature if the answers are somehow deployed for future learners as well as the person who raised it. If this post brings it to the attention of anyone who may not have noticed it, it may be to the good. 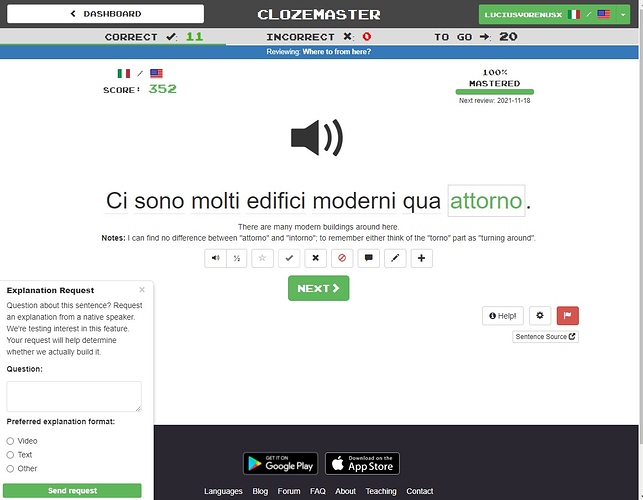 Ciao @LuciusVorenusX you might have seen my post about the “tiny white stripe”? It suddenly appeared way back, then went, now it’s back again in bottom left hand corner. To put it mildly it annoys the heck out of me and there’s nowhere to turn it off. Hence I’ve resorted to putting a piece of screensaver plastic over it on my tablet. Gets in the way a bit but hey, it’s “goodbye white light!”

Perhaps lovely Mike will help us turn it off one day;-D

I’m guessing that you mean this thread. I vaguely recall having seen it but I didn’t make any connection for two reasons.

The first is that I hadn’t ever noticed that box. When I use the mobile (Android) app I’m focused on audio only with text input and I only look at the screen input box, so a box in that position wouldn’t really affect me.

Of course, those were back in the days when we could actually leave home and I’d use the app on my commute. Now that we’ve been locked down for two months and likely to be at least a further two, I’m only really using Web anyway.

The second is that the white box in that thread was for something different to the one that I describe here; specifically for feedback, whereas this one is for something far more interactive; getting help from a native speaker (possibly in video form, no less, which intrigues me) on the specific question. (Somewhat like a CM integrated version of the Hi Native site, but with more features.)

Certainly on Web the presence of the link isn’t a problem as per my screenshot. (It’s perhaps testament to my failing eyesight that I probably would have played around a thousand questions before I even noticed it today. Or maybe it’s because even on Web my preferred method is to listen and I rarely look at the screen if possible until I’ve typed the answer, and then often only to see the notes I’ve left for myself.) On the Android app I’m not seeing a white box at all. (Probably because CM develops on the Web first and it’s only later rolled out to the app.) But I agree, the impact of it would need to be considered on the apps and for smaller screens, subject to the individual user’s choice.

Yes, that’s the little Help box. Yours definitely looks more detailed. Working with dark mode and a dark mode keyboard, the sudden white was harsh for tired eyes but is now solved.

I honestly don’t see the potential in this feature.
I think it would be best for everybody if Clozemaster hired native speakers to go through the forum sentence discussions periodically and weigh in where necessary. I think the forum postings are already equivalent to explanation requests.

To date 68 languages are offered. Assuming that one could FIND 68 native speakers to fill those jobs, and it would probably need more than one for the more popular languages, it may be expecting a bit much of the meagre amount that we pay each year to support such an expansion in the CM workforce.

I think the forum postings are already equivalent to explanation requests.

Except… I rarely see a contribution there from a native speaker. (Nor are there likely to be many; for example I don’t see questions on English because I don’t do from {whatever}-to-English courses.) There tend to be best guesses from other students and Google. This is why I have HiNative bookmarked.

I was assuming that answering explanation requests would require some new hires anyway, so why not put them on monitoring forum posts instead? And, I’m not talking about full-time jobs here; I think a few hours a week would be more than sufficient for most languages, given the low volume of postings to date.

Why? Even if they were part time as you mentioned, there would still be a need to find native speakers to service all of the languages. That is perhaps not so hard for the more popular languages, but not so easy for the less popular ones. I can’t see even having a (for example) part time native Suomi speaker being a great return on investment. Even putting them on as an “on demand” casual wouldn’t be all that easy since there probably aren’t that many people with the required skills who would be prepared to sit around waiting on the off chance that they might score a buck answering a question every couple of weeks on average.

My assumption is that this would be an interface to some site that is already doing this kind of thing, and where there would be a pool of existing native speakers available rather than the costly (and probably wasteful, for less popular languages at least) attempt to run it all in-house.

Granted that’s an assumption on my part; @mike may be able to provide more clarity about what’s intended and how it may work.

Except… I rarely see a contribution there from a native speaker.

I don’t know about any others here, but I, for one, do “watch” my native language Sentence Discussions and the main language sections here (thus getting notified for any new discussions started in either of these sections, regardless of the source language), but only recently did I receive a notification for an English sentence discussion, and that comment regarded the Spanish source sentence, rather than there having been any potential issue with (understanding) the English target sentence, so it seems there’s very little demand for (grammatical) contributions in my native language(s).

I also tried to do a different language pairing for Italian (using a non-English source language) here on Clozemaster, but found it was unusable due to it apparently having relied heavily on “translations of translations” for constructing the corpus (as flagged here). I left comments on a number of these inconsistencies for any potential future learners of the same language pairing, and also “reported” these mistakes, but had to abandon going through more sentences myself. Though of course I’d happily help anyone out on any sentence discussions raised by them.

We’ve already discussed this elsewhere (e.g. here), but the notification settings for any discussions on this forum seem to be hidden away a bit, as well as that some default settings didn’t make the most sense for some, and that starting a sentence discussion from the playing interface didn’t originally result in any notifications from comments on it (as flagged here).

I too make a habit of checking sentence discussions, also Google, Reverso etc. (Thinks… "How can I bribe Piero to come across, perhaps I’ll give him all my lingots;-)