is “suonare” used when playnig musical instruments? is “giocare” better for playing in the park?

perhaps they are busking???

“busking” è “suonare per strada”. in this sentence and many others “giocare” should be used when people, children are playing .“suonare” is reserved for using musical instruments, sound the alarm and ring the doorbell.

@barcarolle: Yes - a bit of a joke on my part. I know giocare vs. suonare Thanks for explaining the phrase for “busking”!

The original Tatoeba English sentence #435016 “It was fun playing in the park” has 4 Italian translations provided by Guybrush88 :-

So “giocare” is certainly provided as a translation when playing in the park.

As for “suonare”, well I used to like going down to lake Ceresio in the summer months just before sunset, where there would often be a group of friends with one of them playing the guitar. I would enjoy listening to the soft music that was being played on the guitar, as well as hearing the relaxing sound of waves gently breaking on the shore in the warm evening breeze.

So, whilst my first thoughts when thinking of a translation for “playing in the park” would involve the word “giocare”, I can also relate to the slightly more obscure use of “suonare”. The sound of the guitarist playing in the park was enjoyable/fun/amusing for me, and so I can imagine that for the guitarist era divertente suonare la chitarra nel parco.

Another one of these sentences where GuyBrush88 has provided alternative translations that might not be so obvious is for English sentence #435016 “He wants red glasses”. In this case my first thought for a translation of “glasses” was “occhiali”, and indeed this is one of the translations Guybrush88 provides, but amongst the others is the (to me) less obvious “bicchieri”.

These sentences and translations are presented to us just because Clozemaster is taking sentences where it can provide a cloze for each of these Italian words - “suonare” and “bicchieri”. These sentences are often perfectly valid, they’re just maybe not the first thing that comes to mind when thinking of a translation from the English version (and sometimes I do find them quite amusing). It does mean that you need to use a dictionary to check the definition and usage of any unexpected word for which you don’t know the meaning (e.g. so that you don’t think that “suonare” is another word for playing in relation to children’s games for example, or “bicchieri” are useful pieces of equipment to place over your eyes to improve your vision), but that is something that I personally would do anyway.

Walking along the marina yesterday I came across a small park with a group of amateur musicians playing folk music. So while it isn’t that normative - si può davvero suonare al parco!

This may not be the perfect sentence to illustrate uncommon and sometimes incorrect use of “suonare” I encountered , but some of them look like they are translations of translations. My point is you do not “giocare” musical instrument, you “suonare” it. But in English you do play it.( That is why, in my opinion, translations of translations get confused). Children in the park usually do not play musical instruments, sound alarm, and ring the doorbell there when they do “suonare” in the park. 99 percent they do “giocare”. I am for the 99 percent use of the word.

Which source language are you using here on Clozemaster for Italian?

You pretty much summed it up for me. Thank you. As to the source I do not look it up usually. I know where to check it , but do I really have a choice at picking the source language when I play? I think I will manage the sentence translations I do not agree with by using the “ignoring” option, so I do not see them again. Hope that will work.

Unless this is a group of girls who are in a school orchestra, and they have to get to a concert (in the park perhaps?), and they’re running very, very late, then this is really difficult to justify the use of suonano. The one that you @barcarolle pointed out already required a vivid imagination to justify the use of suonare, but this definitely goes too far in my opinion. Again, the alternative giocano translation is provided in Tatoeba, but in this case Clozemaster actually has suonano as the cloze.

Oh well, there are plenty more sentences to go through, and even if I did find myself accidentally learning a slightly bizarre translation, I’m sure I’d be understood, and it often provides some mild amusement for the person that you’re talking to (who will happily point out your error).

I remember some years ago, an Italian friend told me that as a child he read Treasure Island in Italian, and he and his friends couldn’t understand how they were navigating using a compasso. In italian a compasso is the word for a compass with two legs that you use to draw a circle. The word that should have been translated for a magnetic compass for navigation is bussola! These young boys had therefore been led to believe that drawing lots of circles would somehow help sailors to navigate. 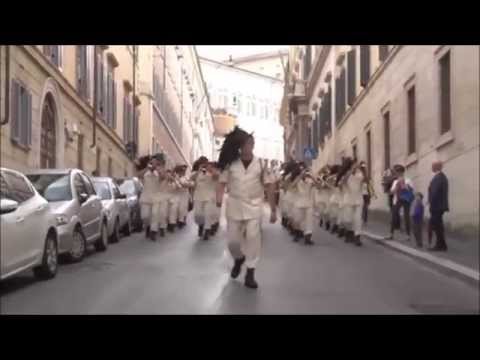 Joking of course. However, I just love these guys;-) A very proud part of the Italian army’s infantry. Their history and fine traditions are worth reading.

Yeah, all joking aside this is totally wrong. But I do like the vision of girls running with cellos…