Isn’t that a French expression on its own?

I think it’s commonly used in English, despite originally being French. Wiktionary for example says it’s borrowed from French. It’s also in the Oxford dictionary as an English phrase.

Yeah, like @mike said it’s from French. You’ll find that English borrows a lot of phrases from other languages, and from French in particular due to the Norman conquest. 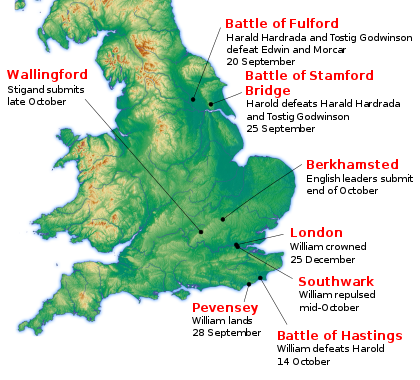 One of the most obvious effects of the conquest was the introduction of Anglo-Norman, a northern dialect of Old French with limited Nordic influences, as the language of the ruling classes in England, displacing Old English. Norman French words entered the English language, and a further sign of the shift was the usage of names common in France instead of Anglo-Saxon names. Male names such as William, Robert, and Richard soon became common; female names changed more slowly. The Norman invasion h...

Yes, it is French.

While it is used in English, I think it’s a bit weird to say it’s an English phrase in any way. By no means is it common parlance nor used in any formal way like de jure or de facto (from Latin).

For my fellow English-speakers… how many times have you used the phrase en garde in your life outside of childhood swordplay because some cartoon or movie taught it to you? My guess is never.