Hi all! I’m excited to announce custom cloze-text creation is now in beta.

You should see ‘My Cloze-Texts’ under ‘Cloze-Reading’ with a button ‘New’ that will allow you to submit your text. Processing will take a few minutes depending on the size of your text. 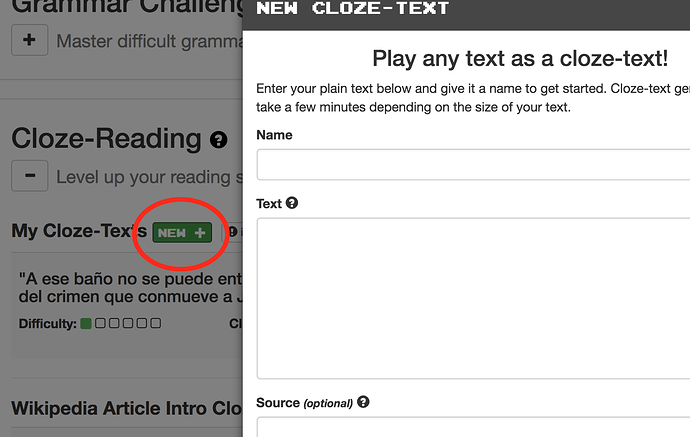 Texts need to be copy/pasted as plain text and there’s a 20,000 character limit. Cloze words are then automatically selected for each sentence, attempting to choose difficult words and avoiding proper nouns.

This feature is currently only available for Pro subscribers. We’re still working out some bugs while it’s in beta, but we wanted to make it available asap. Excited to hear what you think, what would make it more useful, and if there’s anything we can do to make it better.

Thanks for trying it out and thanks for playing as usual!

I totally forgot about the Wikipedia articles. I will go do some of those! Thanks for adding that feature a while back.
Was there an email blast about that? May you could resend or post to FB & Twitter again to remind users?
I will look for the custom cloze option as it is available.