I don’t understand how Clozemaster chooses the right answer for translating ‘you’. Sometimes it is singular, sometimes plural, sometimes informal, sometimes formal. Often there are two correct answers to choose from and it seems random to me which is marked correct. Am I missing something?

I believe this is due to how Clozemaster works, combined with the corpus it is based on.

The sentences come from Tatoeba.org, where the volunteers who contribute to the corpus will generally translate every sentence into every possible translation, thus “you” in English can indeed correspond to “tu”, “Lei”, and “voi”. (However, note that if you were learning Italian from e.g. French or German, you wouldn’t have this issue, since they also use different pronouns for each of them.)

So imagine for example, the English sentence:
“You like me”
You could imagine there are the following three Italian corresponding translation sentences:
I1. “Ti piaccio” (informal “you”)
I2. “Le piaccio” (formal “you”)
I3. “Vi piaccio” (plural “you”)
If the Cloze sentence is “___ piaccio”, then there will only be one “accepted” answer for that sentence, and you have no way of knowing which of these three it is.

However, generally the idea here on Clozemaster is to learn words in their context, rather than just being a one-on-one translation platform/method. While it’s not true for all sentences of course, you can at least in a lot of cases deduce the correct form from the context. It is not the case in the example above, nor in the sentence “Apprezziamo il ___ duro lavoro” (where “suo”, and “vostro” are also appropriate). But in the case of e.g. “I like you”, you will be able to tell from the verb form.

Now, there is a feature that lets you add “Alternative answers”, which are answers which are also correct, which you would like it to include as correct options.

You can either search for the sentence in the collection in question to add them: 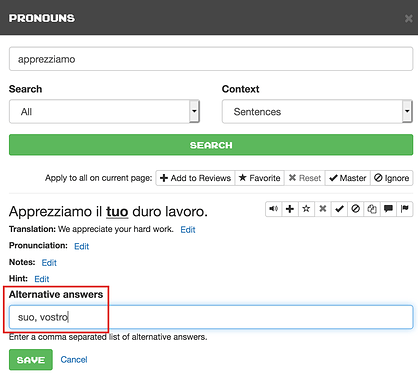 Or, perhaps more easily, you can do so directly from the playing interface, by clicking on the little “pencil” button:

Now, for this specific “It looks hideous” sentence I was playing, the cloze was “orrendo”. But, according to Tatoeba, all of the following could also be accepted: “orrenda, orribile, pessimo, pessima”. If I type any of these currently, it will not accept them, turning them red accordingly:

However, by adding them to the Alternative answers, as follows: 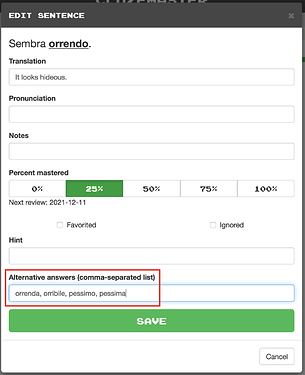 You can see that it will now accept any of them as a correct cloze (including turning green accordingly):

Now, I personally don’t tend to add any alternative answers, because I find I’ve learnt a lot more from carefully looking at the rest of the sentence for any clues on numbers and genders, and about how reflexive verbs etc. work, by not just being able to enter all options at any given time, and thus having to work out for myself in which cases there might be more correct options, and in which case not.

Equally with synonyms of words, I prefer not to have the Alternative answers, because I feel I will always choose the option I’m already most familiar with, rather than forcing myself to actually learn some new words (and the same could be said, for e.g. always going with informal singular “you” if it were possible in all ambiguous sentences).

Especially since you always have the “Sentence source” link to Tatoeba, where you can quickly verify what other correct translations of the same sentence might be:

Anyway, that’s just my two cents. I personally feel that specifically because of this set up, you actually have an opportunity to really learn to understand language in context. But there is always the option of adding Alternative answers too. Hope it was helpful anyway

Mamma mia, I have learnt even more about Cloze! Thanks for taking so much time re this information.

there is always the option of adding Alternative answers

Addition: I should add that I would use Alternative answers more extensively if they were shown after answering; now they are practically hidden.

Addition: I should add that I would use Alternative answers more extensively if they were shown after answering; now they are practically hidden.

Yes, I would really like to have this as an additional feature: that it show all the possible alternative answers after solving the cloze.

While I do like to come up with all options myself first, and would not want it to accept them all as valid input, I would like to easily verify all these options afterwards, rather than having to head over to Tatoeba to confirm.